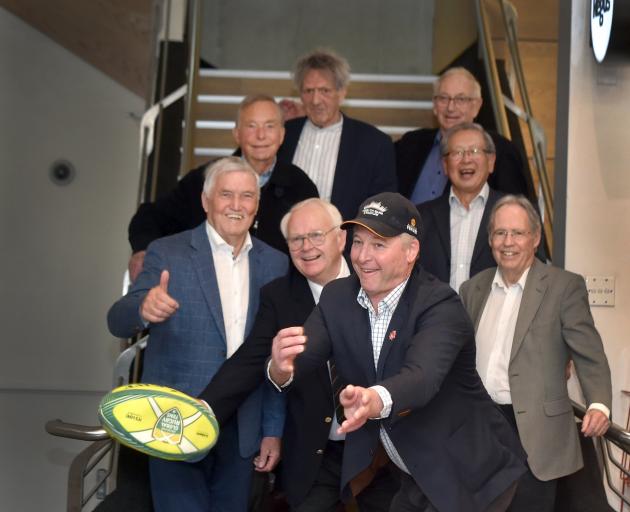 Missing from the group of 10 councillors who voted to proceed with the stadium are Bill Acklin, who sent his apologies, and the late Richard Walls and Neil Collins.

The dinner for the remaining councillors from the 10 who voted "yes" to the then controversial project was held at Golden Harvest Restaurant, in George St.

Mr Chin said it was the second such get-together to celebrate the decision, which ultimately lost him the mayoralty at the next election.

The councillors should take pride in the asset that more than delivered on its promise, he said.

"I glow inwardly every time I go past the stadium," Mr Chin said.

Mr Noone, who now chairs the Otago Regional Council, said the day of the 2009 vote to fund the project was tense and dramatic.

The stadium had been "one of those projects" that created a lot of interest, and a lot of opposition.

"You never look back," he said.

"It’s not a personal decision, it’s what’s best for the city - and in fact it was a regional decision, because it was built for the region as a facility that would serve south of the Waitaki."

The councillors who voted in favour of the stadium had received hate mail and insults for several years afterwards, Mr Guest said.

Still, the naysayers who did remain, continued to get the figures wrong, he said.

Mr Weatherall said it had been a bit of a wrench coming away from Carisbrook, and he respected people who believed building the stadium was not the right thing to do.

"But let’s get on and enjoy it, because we’ve got it, it’s here, and we would probably never do it again - so let’s make the most of it."

Now just remind me, wasn't the vote taken to proceed after the council had failed to raise the percentage of private capital it had imposed on itself as a condition to be met before the project could continue?

Thanks for 10 years of debt slavery via higher rates. Only another 40 years to go before the 'useful life' ends and the white elephant needs to be pulled down. Great for those who benefited from the approx $300m construction cost and interest $12-15m pa.

PS. This great endeavour is still loosing approx $15m pa even when it was 'running smoothly' (remember the year of Ed Sheern?), let alone nowadays with near zero income...Anything but a success story for Dunedin, if it was, it would pay for itself.

And not a face mask to be seen anywhere.

A huge well done to these visionaries!! Dunedin has become a much better city and a progressive city with a point of difference. The concerts etc have been amazing and bring on more. While the naystayers still exist and still probably have stop the stadium stickers on their cars all of 10 years later they are a minority and I know many who did not want the stadium 10 years ago but now love it. We now need the hotel and future expansion of the stadium to beat Christchurch’s new stadium in size. The support at events and concerts shows the positive vibe this has brought to the city with minimal impact on our rates. Now we need hot pools at St Clair!

Visionaries? Saddling inter generational debt is hardly that, the cost, interest and maintenance in a place with no population base or mass transport access. Just here we see the mutual admiration society congratulating themselves over their self appointed memorial which has proven in many news items to be a white elephant, while visitor attractions in the city that could have been or need a shot in the arm (ones that bring in visitors daily, not a few times per year) get left to rack and ruin. Speculation is only that the naysayers are a minority, only some gave in. Remember that a cross section poll done by the uni showed that 82% opposed this money sucking over sized lunchbox, a cathedral to rugby in which rules, deadlines and transparency were blatantly and undemocratically broken to get it, especially around the lack of funding goal from private.

It's ugly and expensive++ A big elephant without the intelligence.

Has been the catalyst for the cities growth and its recognition nationally and internationally. Pretty cheap for what we were delivered.