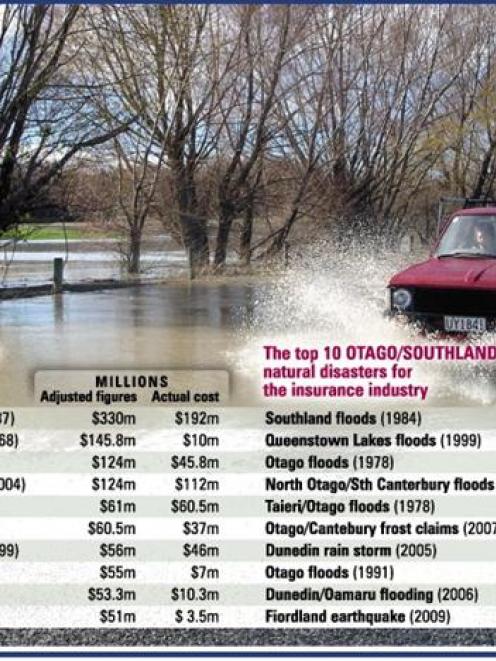 Distasters are coming. That is the prediction from Insurance Council of New Zealand chief executive Chris Ryan, who said the number of disasters caused by storms, floods, tornadoes and snowstorms would rise.

"The insurance industry is of the belief that [the] climate is changing," he said.

Volatile weather patterns, coupled with more people living in risk-prone localities such as coastal, flood plains, and slip-prone areas, was a recipe for more natural disasters, he said.

Mr Ryan cited the 2007 Otago and Canterbury frosts, and the 2009 North Island tornadoes as examples of recent volatile weather patterns which had resulted in large insurance claims.

Insurance Council claims history reveals New Zealand's costliest disaster was the 1987 Bay of Plenty earthquake, which cost $192 million but had been inflation-adjusted to $330 million.

Although earthquakes were "the most destructive" disasters, they were infrequent compared with other natural disasters.

Mr Ryan said the claims history dated from 1968, and began with the sinking of the ferry Wahine which cost $10 million at the time but had been adjusted to $145 million - the second-costliest natural disaster.

Three Southern disasters featured in the top 10 list, which did not take into account claims to the Earthquake Commission, such as the 1979 Abbotsford landslip.

Despite flood protection work, "the risk for all three is still there", and he cited increasing development on the Taieri as one example.

Large waterways, particularly during times of heavy spring rainfall and snow melt, made some areas of the Southern region susceptible to flooding.

Mr Ryan said homebuyersshould check to see if their potential home had been flooded before, as that could affect future insurance claims.

He also advised people to check their contents insurance, often woefully inadequate for disasters such as floods.

Anecdotal evidence suggested for every financial disaster payout, another third could be added to the total for those uninsured, and a further third for the effect on the local economy.

While most homeowners had insurance, many people in rental accommodation did not, and were financially at risk in any disaster.

Last year, the Insurance Council dealt with four large-scale weather and one earthquake-related event, costing insurers $6.75 million, compared with $86.27 million the year before.

Asked if New Zealand could expect a major disaster this year, Mr Ryan was unequivocal.

"Oh, yeah. This last winter was one of the quietest we have ever had."

It is too early to estimate the damage from last month's severe flooding in Southland and the flooding in Queenstown and Wanaka last week.

However, New Zealanders could expect to see more weather volatility.

"New Zealand is exposed to a lot of weather and climate extremes."

Otago Civil Defence emergency management group co-ordinator Scott McNaughton said it was important for people to be prepared, and referred households to the survival guide at the back of their telephone books.