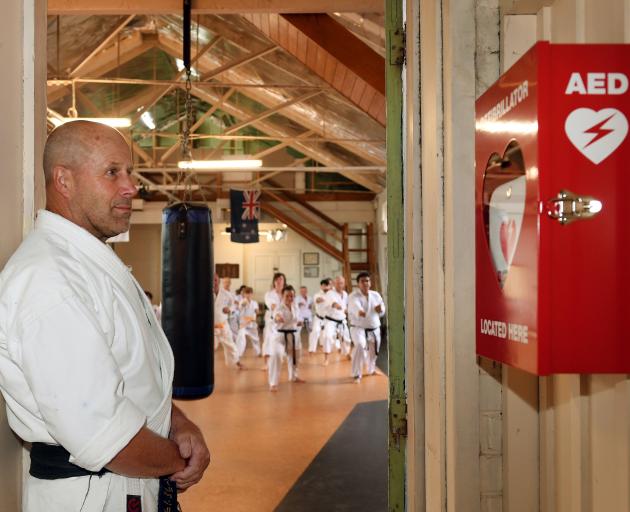 Seido Karate Dunedin dojo head instructor and sixth degree black belt Kelvin Lewis notes a newly installed defibrillator which is to aid people having heart attacks in the King Edward Technical College. PHOTO: STEPHEN JAQUIERY
With a black belt in karate around your waist, you can defend yourself from most manners of evil — but not a heart attack.

Mr Lewis, a construction project manager and former police constable, said the first incident happened in late 2019 and the second was in October 2020.

Both people were unconscious and had stopped breathing.

There was a third incident more recently in which a man had a heart attack at a camp Mr Lewis was attending.

He played a part in resuscitating the latter two.

"I’m sort of used to it, being an ex-policeman. You just get in and do what you’ve got to do. I just fell back on natural instincts, really.

"They are very fit and healthy black belts, so it was very surprising to see them having heart attacks.

"It was quite harrowing for the young ones to see something like that happening."

Mr Lewis said it was only because the club had members who were highly skilled at CPR, that the two men in his dojo survived and continue to practise the martial art at the club.

However, he was worried about what would happen if those skilled people were not there.

"It was decided that we should get a defibrillator. If we got one, we probably wouldn’t need to use it — which is great — but if we didn’t get one ...

"Having a defibrillator gives us a bit more confidence in an event like this because there were one or two people who weren’t too sure about what to do in the situation when it came to doing compressions and mouth to mouth."

He said the incidents had been good learning opportunities for club members.

Since getting the defibrillator, medical experts had run seminars for members, showing them how to use the equipment and what signs to look for when someone was having a heart attack.

"The machines are very good. They basically tell you what to do."

The machine would be available to all occupants of the King Edward Technical College building, he said.