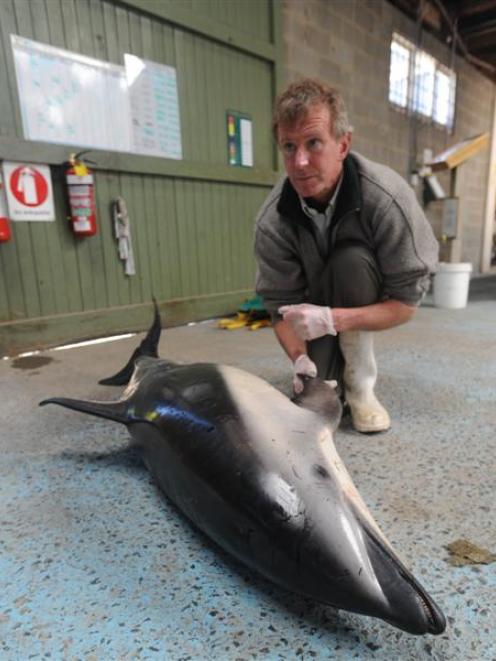 The dusky dolphin was found in a set net by the fisherman, who asked to remain anonymous, on Thursday.

The man said he had been fishing in the harbour for 36 years without such an incident.

But on Wednesday night he rowed about 100m from the shore near Portobello, and laid his net in about 3m of water, hoping to catch fish for both his family and his cat, who was keen on barracuda.

When he returned early the next day, he found the dolphin.

"It shattered me," he said of the find.

"I felt a bit sick. I very much regret it. I don't intend to do any set netting in future."

The man said he was careful not to set his net at times there was a lot of wildlife, like shags or sharks, in the harbour.

"From my own ethical point of view, I can't justify doing this," he said of set netting.

The incident showed clearly what could happen, and he said other people might want to reconsider whether they continued set netting.

The fisherman notified authorities of the incident, and Department of Conservation marine ranger Jim Fyfe said the man had been fishing legally, and "did the right thing".

Set netting had been banned at sea off the Otago coast, but was legal in some harbour and estuary areas.

Mr Fyfe said the dolphin had been picked up, measured, packed up, and sent to a Massey University researcher.

Set netting "has been recognised as a quite indiscriminate fishing method".

"Set nets are an accident waiting to happen.

Dusky dolphins were not an endangered species, and were spread throughout the southern oceans.

Despite that, Massey University senior lecturer in marine ecology Dr Karen Stockin, of Auckland, who will receive the animal, said little was known about the "basic biological parameters" of the dolphin in New Zealand.

It was not known, for instance, how often they reproduced, what age they became sexually mature, or how many calves they had, Dr Stockin, of the Coastal-Marine Research Group, said.

"We don't often get access to carcasses," she said, and being sent the Dunedin dolphin was "absolutely" helpful to the research.