A delighted Mrs Hardy (nee Goodman) who now lives in Canada, yesterday took the chance to see the muff, which she and her late sister Maxine Goodman gave to the museum several years ago.

‘‘It’s great, it’s fantastic,’’ she said as she examined the item with her husband, Bruce Hardy.

She was also impressed at the fine condition of a fashion item, and its yellow marking, which had been created about 1880.

‘‘We’ve often talked about wanting to return it to its original home,’’ she said. 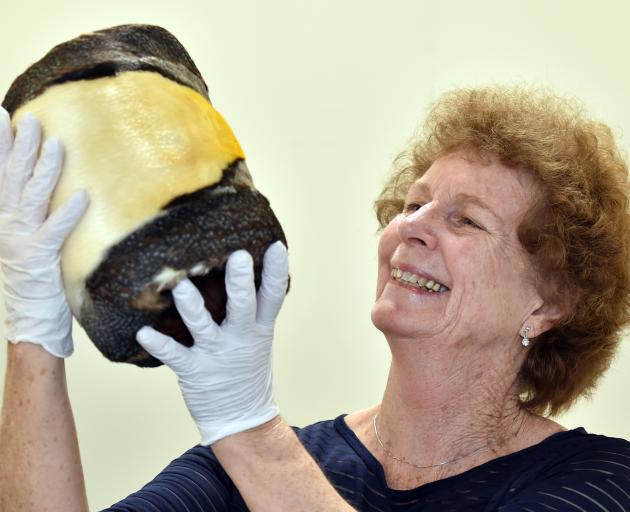 The muff, designed to keep a woman’s hands warm, had recently appeared in a display at the museum’s People of the World gallery.

They settled in Christchurch, but it was at the George St shop of Dunedin furrier J. Constantine that Mr Goodman had bought the gift for his wife.

Mrs Hardy (71), who is Mr Goodman’s great-granddaughter, said she had first been allowed to see the muff when she was about 7, and living in Sydney.

The Goodmans’ son Edmund, who had earlier moved to Australia, had inherited the muff from his parents.

The muff spent about the next 100 years in Australia, Edmund’s daughter-in-law Vera becoming the next owner.

She later moved to Canada to be with her children when she was widowed in 2005.

After her death, Mrs Hardy and her sister decided to return the muff to Dunedin.

Mrs Hardy, who lives at Victoria, in British Columbia, and her husband are making a three-week visit to the South Island.

She was pleased that humanities curator Moira White had undertaken research which had revealed more about the early family history of Mr Goodman and his wife.

Ms White was yesterday also pleased to meet Mrs Hardy in person, and had been ‘‘thrilled’’ that the muff, had ‘‘completed its long journey home’’.