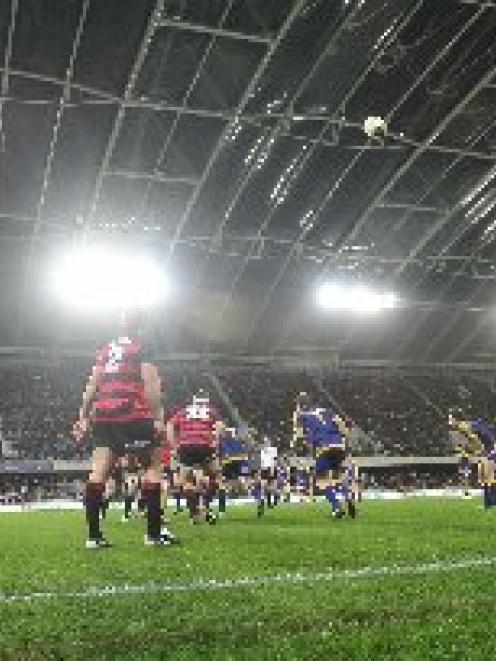 Otago plays Canterbury in an ITM Cup match at Forsyth Barr Stadium last August. Photo by Craig Baxter.
The future of "private sector funding" for the Forsyth Barr Stadium may be thrown into question by the shock announcement last night the Otago Rugby Football Union (ORFU) could fold by the end of the week.

Dunedin Venues Management Ltd (DVML), the Dunedin City Council-owned company running the stadium, has sold season tickets on the expectation an Otago team would play at the stadium in the ITM Cup.

Some of the more than $40 million of funding raised came from those sales, and may now be in doubt if there is no team, as would the expected rent.

Chief executive David Davies said last night there was "tremendous sorrow" the union that had run the sport in the region might collapse after 131 years.

He said those who had bought season tickets to the stadium expected to be able to see both the Highlanders and the Otago team.

"It's a very important part of considerations in terms of attendance," he said.

What the issue meant for DVML was "very much dependent" on decisions of the New Zealand Rugby Union (NZRU).

NZRU chief executive Steve Tew said last night it was "the preference" of the union to have an Otago team in the ITM Cup, but that outcome was clearly not a fait accompli.

Mr Davies said if a team was included in the competition, there would not be a problem.

But he expected there would be "a hiatus of about a month" before that matter became clear.

Mr Davies, who had to deal with serious financial problems when he was chief executive of English football club Queens Park Rangers, said he was not fully up to date with insolvency law in New Zealand, but "these things take time".

He said he was pleased the NZRU's press release last night was "more hopeful than what we thought".

"People are very supportive of local teams," Mr Davies said. He hoped there might be a group that could come together and "help out".