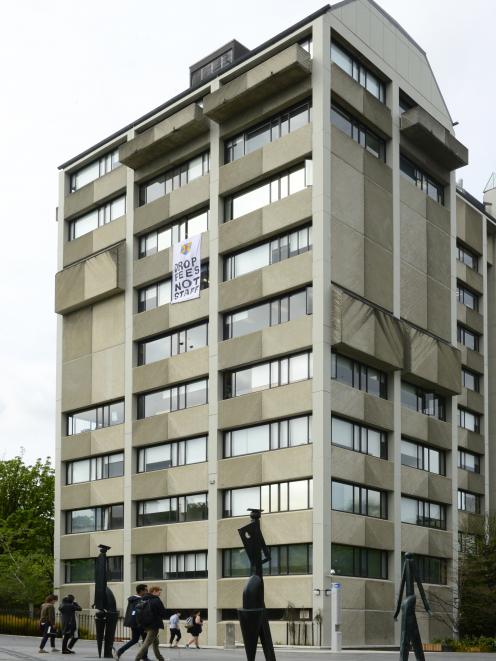 The banner, hung from the seventh floor of the humanities building yesterday morning, was in protest at ``continuing staff cuts'' which had targeted humanities and physical education students as well as a rise on all student fees.

Domestic tuition fees are to increase by 1.9% (between $150 to $250 dependent on study area) while the student services fee is increasing by 8% which equated to a $59 rise for an equivalent full-time student.

A student involved with the protest, who did not want to be named, said the message of the banner appeared to resonate with many students who had stopped to take photos.

``The staff cuts and dramatic fee rises have really risked our reputation as a university internationally and people are beginning to lose confidence in the integrity of our degrees.''

The student was concerned the university would ``crack down'' on the protest.

The group behind the banner wanted the protests to continue into next year.

``They [the university] are trying to quell the student voice because it's overwhelmingly opposed.''

The students questioned the ``honesty of the university'' when it stated the fee rises were reflected in increasing the quality and provision of services.

University acting vice-chancellor Prof Richard Blaikie said the students had the right to protest as part of a free and democratic society.

``It is doubly so in a university, where we value freedom of expression.''

Prof Blaikie disagreed the increases would risk the university's reputation as the increase to the core fee was an adjustment at the rate of inflation.

``This does not equate to a dramatic increase. It is in line with tuition fee increases at other New Zealand universities.''

The university did not anticipate the student services fee increase would impact adversely on its reputation.

It specifically supported the implementation of new initiatives which would be positive for its reputation and, more importantly, the wellbeing of students.

Otago University Students' Association president Hugh Baird said the protest was ``a good way for them sending a bit of exposure for their cause''.

As a student representative, Mr Baird said he was not in support of the tuition fee increases.

However, he supported the service fee increases.

The students' actions in protesting this way was ``fantastic'', he said.