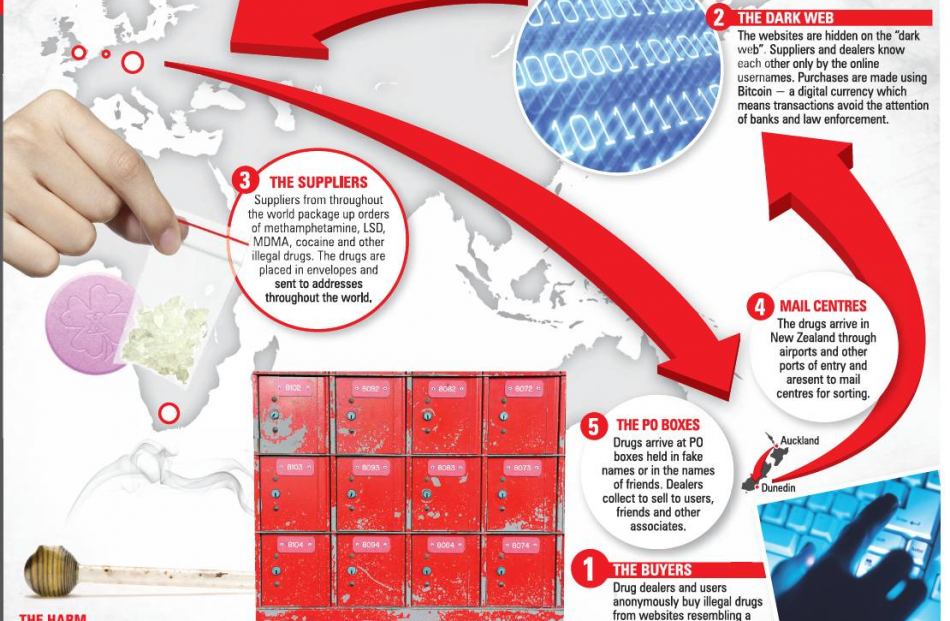 Drugs which first presented problems for New Zealand authorities in the 1980s and '90s are making a comeback. But the modern drugs dealer is likely to be found behind a computer screen rather than on a street corner. Timothy Brown investigates.

Forget gangs - the South's modern drugs scene is controlled by technophiles - anonymous mouse-clickers who lurk in the deepest crevices of the ''Dark Web'' finding their product and importing it from thousands of kilometres away.

But, regardless of the source, the outcome is the same, Southern police say.

''Whatever anyone's views on whether drugs are good or bad, we certainly do see the harm it does in the community working this job day-in day-out.

''We see people end up in psychiatric care, very drug-dependent committing crimes for their drug habits; social harm with their families; the whole gambit of pretty horrible things you see associated with drug dependencies.''

Detective Hamish Barrons says Dunedin's class A and B drug scene is burgeoning and school children are now accessing the drugs.

''It's our concern that this stuff is floating down to younger and younger people. This last group [ arrested for importing class A and B drugs] was quite young themselves.

''It would be a young teenage market they were supplying to.''

Imports on the rise

Drugs such as cocaine, MDMA (the active ingredient in ecstasy), LSD and methamphetamine are being seen by authorities more regularly in the south.

By the end of April this year Customs had carried out more than 400 interceptions nationally, and found ephedrine (which can be used in the manufacture of methamphetamine) and methamphetamine in Dunedin.

But whatever is being discovered is only ''the tip of the iceberg'', Det Snr Sgt Inglis says.

''We are certainly not all over it. There's a huge volume of material coming across the border every day,'' he says.

''It's hard to put a quantitative figure on it but it's substantial.''

But with extravagant profit margins and the safety of the ''dark web'', more and more people are taking their chances as internet users-cum-drug dealers.

Earlier this month, four men aged 18-20 admitted their parts in a drug ring found to have imported $167,000 worth of illegal drugs.

The group's head, Daniel Patrick McKechnie (20), of Dunedin, faces sentencing in July for his offending after he used the ''dark web'' - an area of the world wide web which is not canvassed by search engines and allows for greater privacy - to buy illegal drugs and have them delivered to post office boxes held under false names by his associates.

Last year, 22-year-old Dunedin student Nicholas Peter Heatley was sentenced to four years' jail for bringing more than $70,000 worth of illegal drugs into the country in the same fashion and dealing to young people in the campus area.

''The web is difficult to get into at times.''

Det Barrons adds: ''These aren't New Zealand-specific problems. We all have the same issues with the different agencies all over the world.

''The FBI closed Silk Road and the next one popped up. It's like squeezing a balloon.

''They all use their own currency with Bitcoin, so you can't trace them through the banks.''

Behind the cloak of online anonymity, the drug dealers felt empowered.

''They are throwing the dice,'' Det Barrons says.

''There's a certain degree of naivety but they also don't think they will be caught.

''They use false names for the post office boxes, they buy false IDs over the internet, so they go out of their way to minimise the risks of being traced.''

''This is a huge challenge around the world,'' he says.

''I simply don't think Customs will have the capability or capacity to search every envelope that comes into the country.''

In addition to ''traditional'' law enforcement, he believes New Zealand needs to be more proactive in educating the end users, who accept the greatest risk in the drugs' supply chain.

''This kind of work doesn't require law reform,'' he says.

The best approach to prevent drug use is education, he says.

''I'm not saying it's a futile business to enforce those markets. I'm saying there's other approaches we could take as well.''

National Poisons Centre toxicologist Dr Leo Schep is all too aware that illegality and prohibition do not make problems go away, but instead go underground.

The centre receives few calls about illegal drugs and, since synthetics were taken off the shelves, reports of their effects have dropped also.

''Once they become illegal, people don't tend to call us,'' he says.

''I'm sure it's going on and I'm sure people are bringing stuff in through the black market.''

Rumours are circulating about the proliferation of class A and B drugs, he says.

''I have heard there is an increase in hard drugs, particularly meth, floating around the South Island.''

However, few sought help from medical services because of the illegality of the drug.

''It's a major problem,'' he says, of gangs' increasing presence in the southern drugs market.

The gangs are also importing online, but in larger amounts, and methamphetamine is being cooked in New Zealand, as well.

Police do not know of cooking happening in the Southern district, but ''that's not to say it isn't happening''.

''They are still targeting the dollar,'' he says.

''Whatever they are doing they are chasing easy money and causing community harm - quite a lot of community harm. You just have to look at all the records around methamphetamine; the damage, the paranoia, the shootings, the deaths in the past. It's not changing.''

The purity of drugs is also on the rise, Det Barrons says.

''On these clandestine websites you can create feedback for a seller, a bit like TradeMe,'' he says.

''If you give them positive feedback it enhances their reputation to other buyers. So if they start selling crap then the feedback will reflect that sooner rather than later.

''We are starting to come across proper LSD again ... we are getting real ecstasy through the borders again. They [drug users] want the real McCoy. They don't want some cheap knock-off.''

Despite the gravity of the problem, police remain committed to stamping out the illegal drugs trade, online or otherwise.

Det Snr Sgt Inglis has a message for those importing and dealing illegal drugs.

''We will continue to target it. If people do it, they will be targeted by us,'' he says.