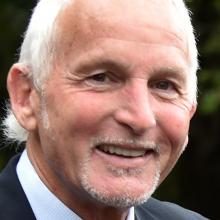 Official council figures provided to the Otago Daily Times detail the council’s $56million in reserves, its plans for spending up to $24million on a new Dunedin headquarters and a breakdown of spending in the Queenstown Lakes, which is affected by lake snow.

Mr Laws, who was elected to the council’s Dunstan ward in October, said: "It’s worse than we thought, to a degree.

"They’ve got a huge amount of money and they spend very little."

The former MP and Wanganui mayor has been rattling cages since being elected, calling on the council to make reforms and forming a Dunstan "partnership" lobby of the ward’s three councillors.

He did not mince words  speaking at  the annual meeting of Friends of Lakes Hayes in November.

Figures released by the council paint a picture of a debt-free organisation with plenty of cashflow.

It has $56million in "funded" reserves, including $15.3million earmarked as "general reserves" and $11million for "building".

Its annual dividend from Port Otago is at least $7million.

Spending figures on flood protection and river management, particularly on the Leith and Taieri systems, and public transport, are heavily weighted towards Dunedin.

After a tongue-lashing from Conservation Minister Maggie Barry last year, the regional council has committed $100,000 for wilding pine control. That is more than it spent over the past six years in total ($78,000).

Mr Laws said the council figures showed how little had been spent "on anything".

The council monitors the large lakes in the Queenstown Lakes district in three consecutive years out of 10.

"If you’re monitoring those lakes only in a three-year cycle every 10 years you haven’t got a clue what’s going on."

He accused the council of having a very hands-off policy towards Dunstan issues and particularly Queenstown and the lakes over the past five years.

"It’s withdrawn staff from the area, it’s not monitored the lakes which is its basic statutory responsibility, it’s spent very little money dealing with pests, whether flora or fauna, and I think personally that the reason in large part is if you don’t live in an area you don’t properly understand it."

Mr Laws has an ally in former three-term councillor Gerry Eckhoff, who was not  re-elected in last October’s local body elections.

Mr Eckhoff is a retired sheep and beef farmer in the high country near Roxburgh, and a former Act New Zealand member of Parliament.He lobbied unsuccessfully while on the council for money to fight the spread of wilding pines.

The past nine years were frustrating, he said, for "being able to get virtually nowhere".

The council had been "excessively frugal", Mr Eckhoff  said — and that frugality had "undoubtedly" come at an environmental cost.

He pointed to the rise of lagarosiphon, lake snot and didymo as examples.

"The question does need to be asked where did those reserves come from? Where is that money not being spent to enable it to go into these reserves?"

With the spread of lake snow this year from Lake Wanaka to lakes Wakatipu and Hawea, the council appeared to be more active. It had contracted Landcare Research to study the genetics of the alga that produces lake snow.

In its latest round of big lake monitoring, the council has for the first time taken DNA samples of lake snow — which first appeared in Wanaka in about 2004. It  had used advanced testing methods in its most recent sampling.

Chairman Stephen Woodhead said the council was reviewing its whole "state of the environment" monitoring programme, including a $2.1million water quality monitoring budget, to see if it was adequate.

"The review’s outcome will help us decide whether to monitor lakes continuously."

As for the plan to spend up to $24million on a new Dunedin building when the inland lakes were suffering, Mr Woodhead said: "It is not an issue of one at the expense of the other."

Otago Fish & Game chief executive Niall Watson, who has been urging the council to spend more on science and monitoring, did not oppose new headquarters.

"ORC’s present accommodation isn’t adequate, that will affect their performance."

He strongly believed the "upper catchment" lakes needed active management  to be protected. The regional council has hinted at a return to Queenstown after closing its office in the resort about a year ago,  after the death of its main staff member, Colin Walker.

Mr Woodhead said the community would be consulted in its next annual plan on the possibility of the council re-establishing permanent  Queenstown Lakes staff.

Congratulations to Mr Laws for holding the ORC to account and trying to bring about the well overdue change in that organisation. I find it appalling that the ORC appears to have in the past rejected requests for funding to investigate the lake snot and I am also concerned to read how pitifully small the amount is that has been given to the eradication of wilding pines. The years since lake snot was discovered have gone by and had Mr Laws not been elected to the ORC, I am sure it would have been business as usual. High time for a shake-up in the ORC. His dismissive attitude towards Mr Laws does not reflect well on the current chairman.