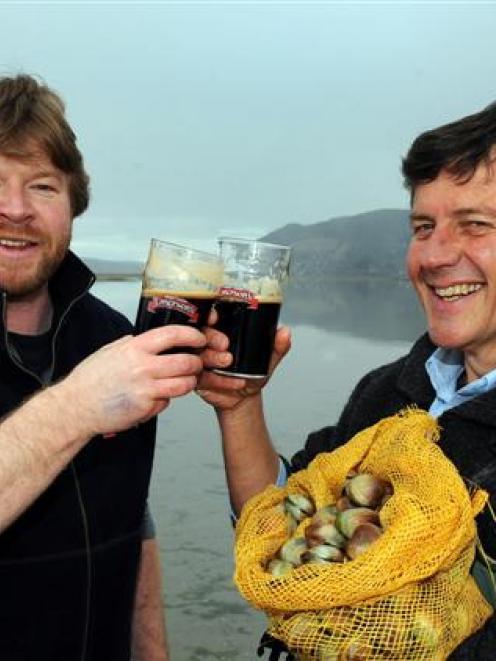 Emerson's Brewery managing director Richard Emerson (left) and Southern Clams managing director Roger Belton toast a new clam stout, which is believed to be a world first. Photo by Stephen Jaquiery.
It is being hailed as a "heavenly match" which gives "hints of vanilla and ocean briny characters" and the combination of stout and clams is believed to be a world-first.

Dunedin's Emerson's Brewery launched its new southern clam stout on Otago Harbour yesterday and the ceremonial toast of the "big, velvety" stout was made over a clam bed.

Managing director Richard Emerson said oyster stouts had been around since the late 1930s, but to his knowledge nobody had produced a clam stout before.

"We have modelled it on the big export style stouts of yesteryear.

"The briny notes become more prominent the more you sup.

"It's incredibly satisfying to produce an original stout of this quality and fantastic to do it with local produce."

A "bit of research and development" went into producing the stout and three brews were put down before the right balance was found.

The brew is a limited edition and Mr Emerson expects it will be gone by the end of the month.

He will be taking the southern clam stout to Beervana and BrewNZ Beer Awards in Wellington next week.

Southern Clams managing director Roger Belton said he was not a beer expert, but he was amazed the two could be married together to produce a beer that was "so full and rounded".

"What Richard has done is such a positive example of how Otago businesses can cut a national profile by embracing opportunities on their own doorstep."