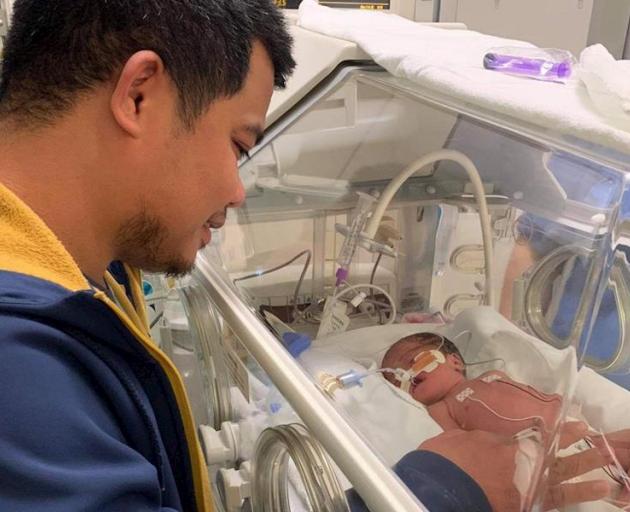 Heylon Sevilla, with son Nio (5), keeps a watchful eye on newborn daughter Estella Marie while he waits for news on his wife, Teresa. PHOTO: SUPPLIED
A Dunedin intensive care nurse is fighting for her life in that very unit after collapsing at 32 weeks pregnant.

Teresa Sevilla was working a night shift at Dunedin Hospital on August 3 when she collapsed.

Her husband, Heylon Sevilla, also an intensive care nurse, initially thought it was a fainting spell, similar to one she had experienced a few weeks ago.

Instead, the family’s nightmare began. Mrs Sevilla, heavily pregnant, did not wake up.

She was admitted to the intensive care unit and had a breathing tube inserted.

A CT scan of her head showed a massive bleed. Because her brain was still very swollen after the sudden bleed, the neurosurgeon deemed it risky to perform surgery.

The decision was made to perform an emergency Caesarean, and baby Estella Marie was born.

Mrs Sevilla remains in intensive care while the medical team tries to stabilise her until she can have surgery.

Her newborn daughter is in the neonatal intensive care unit, but breathing on her own.

More than $26,000 has been raised for the family after a friend set up a Givealittle page this week.

A spokesman for the family said they felt a deep sense of gratitude for the "outpouring of aroha in this very challenging time".

"Heylon feels so overwhelmed reading the messages in the Givealittle page, especially a couple of them coming from their previous patients.

"He is amazed at how much of an impact he and Teresa made to these people in the short span of time they looked after them."

Baby Estella was doing well, getting "bigger and cuter" every day. The pair also have a 5-year-old son, Nio.

"At this time, prayers would be the best thing we could give the family while we wait for Teresa to wake up."

Southern District Health Board chief nursing and midwifery officer Jane Wilson said they were supporting their "treasured" nurses during an extremely difficult time.

"ICU staff dedicate themselves to caring for some of the most unwell people in our communities, and now our team members are needing the care of their friends and colleagues.

"The support, kind messages and generous assistance the family has received from across the community is greatly appreciated."