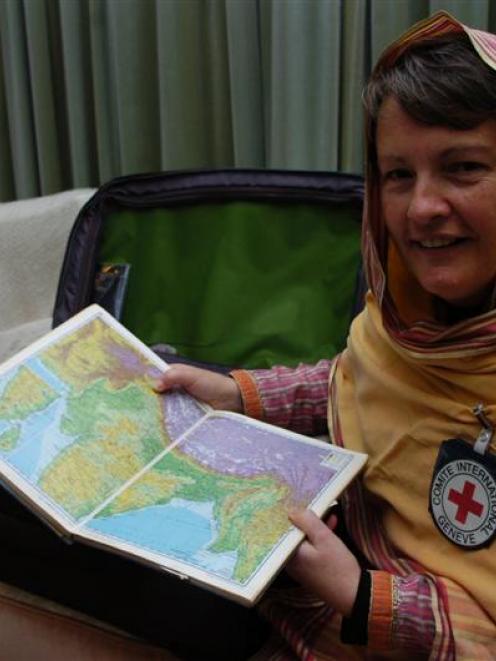 Dunedin nurse Barbara Turnbull wearing the tunic and headscarf foreign women must wear in the Islamic Northwest Frontier area of Pakistan. Photo by Jane Dawber.
Dunedin nurse Barbara Turnbull will be in war-torn northwest Pakistan next week, working in a Red Cross tent hospital, living in the "safe" part of the city of Peshawar where suicide bombings and gun battles occur frequently and adjusting to temperatures of 45degC.

She would not have it any other way.

"It has been my lifelong desire to do this.

"It is hard work, hard slog, but you are doing something which is really, really valuable."

Miss Turnbull leaves today on a six-month contract as a theatre nurse in a field hospital staffed by about 70 foreigners.

It is her fourth contact since 2008 and follows two periods in Afghanistan and one in the Democratic Republic of Congo, in Central Africa.

Since 2004, a full-scale armed conflict has been raging between the Pakistani armed forces and Islamic militants in Pakistan's Northwest Frontier region, near the Afghanistan border.

Miss Turnbull said last night she was not sure who her patients would be but guessed they would be militants.

"In the other places, we were supporting Government hospitals, but this time we have our own hospital.

"This time it will probably be emergency surgery - war surgery following bombings and air strikes."

Miss Turnbull said while she knew there was a small risk of being in danger in Pakistan, she was not worried.

"We should be safe. Red Cross hospitals are always no-weapons areas."

Raised on a Henley dairy farm, Miss Turnbull (52 tomorrow) was educated at The Taieri High School and completed her nursing training in Dunedin 30 years ago.

She said she had dreamed of being a Red Cross nurse since seeing one on television as a child.

"They showed a nurse working with starving children in Biafra.

"To me that was the epitome of nursing - working for a good movement and doing something that wasn't all about me."