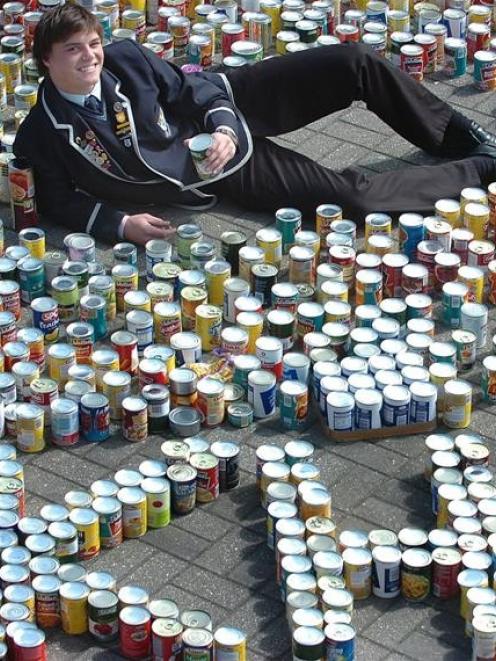 Kings High School student council chairman Sam Brown sits among the 1780 cans of food collected so far by pupils for the Presbyterian Support Food Bank. Photo by Peter McIntosh.
Kings High School has taken on an uncanny resemblance to a baked bean and spaghetti manufacturing plant as pupils aim to collect 2500 cans of food for the Presbyterian Support Food Bank by the end of this week.

So far, they have collected 1780 cans of everything from fruit salad, chilli beans and soup to tuna, spam and stew.

"There's people out there in need, and at the moment, even more so with the economic crisis taking its toll on families throughout Dunedin.

"As the Christmas break approaches, it will be nice for pupils to see the benefits of helping people out."

The can drive was an initiative of the school's student council.

Chairman Sam Brown said pupils had donated the cans instead of money on the school's three mufti days this year.

It was hoped the fourth and final mufti day would put them over the target of 2500 cans, he said.

"Last year we did it, but not to the same extent - we only got about 700 cans. We heard at the start of this year that the food bank was a bit short. We saw the potential in last year's idea and decided it would be a great way to make a difference in the community."

Mr Smith was delighted with the response so far and hoped pupils would bring three or four cans to the final mufti day, rather than the customary single can.

He also encouraged the local community to get into the spirit of the campaign by donating cans at the school office.