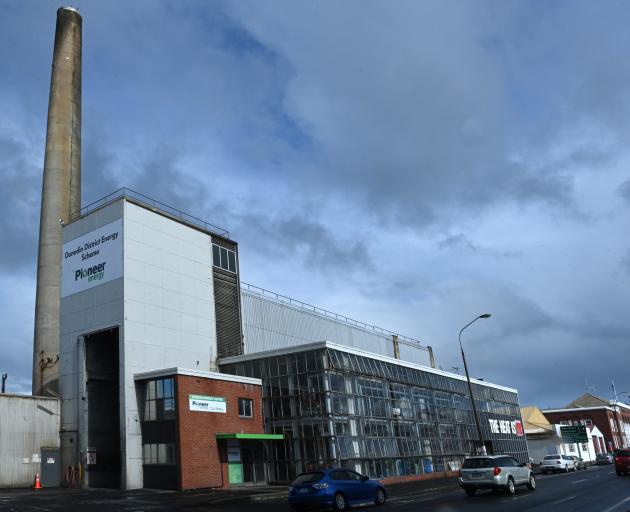 The system would replace the coal-fired Dunedin Energy Centre with one run by biomass, woodchip that can be sourced from local forestry residue, which has emerged as the preferred energy source.

The Dunedin Energy Centre heats the Dunedin Hospital and University of Otago buildings, and until recently, heated Cadbury.

Such boiler systems distribute hot water around a piped network, so individual buildings can use it for air conditioning or domestic hot water.

The new system could run along George St in a big expansion of its reach.

The Dunedin City Council yesterday said it would not release a recently finished business case on the scheme to the media, as it contained confidential information, but provided some information from the business case.

The scheme was announced last last year, when the council, university, Southern District Health Board and Ministry of Health signed a Memorandum of Understanding to work together on the project.

It seems while the new hospital will use the system, the health sector does not want to be a big player in its development.

DCC energy plan co-ordinator Jeremy Baker yesterday said an indicative business case had been completed by Stantec, the consultant hired to do the work.

Each of the four organisations would now review the report and consider its next step.

''There would have to be discussions around commercial arrangements.''

In the case of the council, a report would go to councillors soon with options and recommendations about how to proceed. He expected the other organisations would be doing the same.

Mr Baker said the plan took a high-level look at the project, laying out plans for an energy plant and energy centre, their size, and equipment needed.

The business case demonstrated the economic and technical feasibility of the system, and biomass had emerged as the preferred energy source.

When biomass came from sustainably managed forests, it was a carbon-neutral fuel.

Timing was an issue for the project, particularly in terms of the council's plans to upgrade George St, which would include work on underground infrastructure.

''We're going to make every effort to co-ordinate the pipe installation within the other infrastructure works that are going on to minimise disruption and cost.''

It was too early to say where a new boiler house would go, once the Castle St building was no longer used.

Southern Partnership Group chairman Pete Hodgson, who is overseeing the hospital build, yesterday said while the new system was expected to heat the new hospital, modern building materials meant it would require a lot less heating than the current hospital.

He said he was not sure what would happen with the report within the SDHB or MoH, but his view was leadership for the project would rest mostly with the university and the city.

Mr Hodgson said the university was ''likely to be the main mover and shaker'' in terms of providing the energy centre itself, though it was possible another arrangement would be needed for the piping. That could be a business model with multiple shareholders, something he expected would be led by the city, as it was a bigger system running through much of the city.

A spokeswoman said the university would need to identify all other options possible for itself then initiate a ''business case process'' to assess them. That work was about to begin, and a business case was not expected until at least later next year.

Burning biomass releases significantly more CO2 than coal.
By the same argument coal is carbon neutral as the carbon in the coal was sequestered millions of years ago and is simply being released just like when you burn wood...
This is not a solution just a loophole.

The existing plant burning massive amounts of coal is certainly a thing of the past. I have questions about the scope of the report- were the right questions asked.

It looks like the hospital won't pay- what is their plan? Can the University really afford this, or the city infrastructure? Has the alternative of not having a plant that burns something in town and shifting to renewable power been properly costed? Is it not more cost effective to invest in insulation and reducing heating, or general purpose infrastructure (e.g. electricity) rather than hot water pipes?

I look forward to seeing more of the report, or an analysis with more thought about sustainability.

Why not include house hold waste as a fuel source too?
This so called 'Green' council seems determined to build a massive new landfill site, out of sight, out of mind, in the hills near Otokia and then truck the waste out there from Green Island.
Like most 'Green' plans, it is riddled with hypocrisy.

"When biomass came from sustainably managed forests, it was a carbon-neutral fuel."
No, it is NOT !!!
Considerable energy, typically in the form of coal and diesel are required to manufacture machinery and then power it. This is required to harvest, dry, then transport the wood chip fuel.
Not only are 'carbon-neutral' fuels a total fiction, stating such a scheme is 'carbon-neutral' is a total lie.
I know it all sounds good and it's prestigious in the media's eye being part of the 'global green revolution' but what Dunedin needs, is to get the rate burden down and improve drainage and waste disposal.
I would be a lot more impressed if the DCC and the ODT focused on these issues.

Just like the new hospital build and the harbour redevelopment, this will never happen!

Instead of burning trees it should be burning waste. Look at Basel, Switzerland where they have one of the most advanced systems of burning waste and filtering the smoke. It provides heating to 8000 households! This would take care of all the waste of Otago and Southland - two problems solved once and for all, thanks!