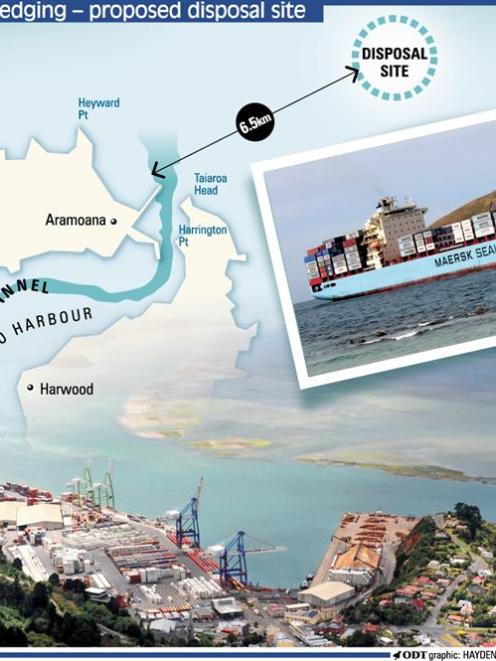 Port Otago's proposed disposal site.
Port Otago's long-term "next generation" channel-deepening proposal may be its largest project during the past 145 years, but it has attracted widespread criticism, from recreationalists and environmentalists through to scientists.

As with dairying and mining proposals and their work practices in recent years, the stage is set for determining the importance of balancing environmental safeguards against economic needs.

The Otago Regional Council's staff support the proposal, saying adverse effects on the environment would be minor and could be adequately addressed through the recommended consent conditions.

It notes the proposed activity is consistent with requirements under the Resource Management Act and ORC's policies.

Author of the ORC report, Dr Selva Selvarajah, also noted the project would provide for the continued economic wellbeing of the Otago region.

"If the development did not take place, then the regional economy will lose a significant amount of economic activity, including more than 1000 jobs within 20 years," he said.

Port Otago has applied to the Otago Regional Council for resource consents to remove more than 7 million cubic metres of silt and sand spoil and dump it out at sea over a 20-year period.

A three-week hearing is scheduled to start on April 4.

At the heart of the matter for many of the almost 150 opposers is where that silt settles and its effects on flora, fauna, seafood, water quality, wildlife and Dunedin's otherwise pristine northern coastline and beaches.

As the ORC is Port Otago's 100% owner, the application will be heard by three independent commissioners.

A decision on the application is likely to be months away and the outcome will be able to be appealed in the Environment Court.

The ever-increasing size of container ships has prompted Port Otago to seek to dredge its lower harbour channels up to 2m deeper to accommodate the ships.

However, recreational and commercial interests are seeking justifications, answers and assurances that Port Otago's proposal will in no way be detrimental to their use of the waterways and coastline.