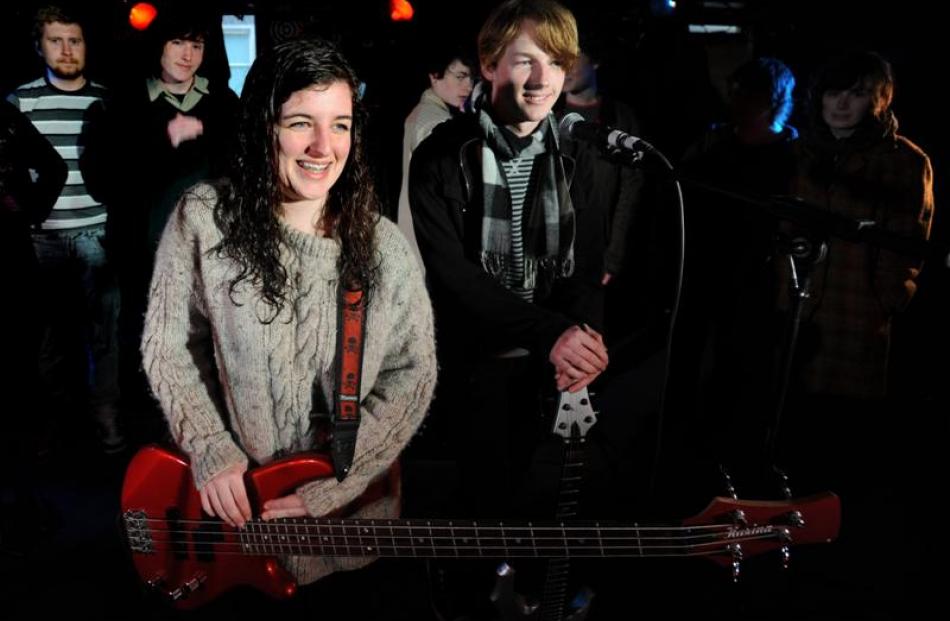 Getting ready for a tour this weekend are Chicks Project members Cassandra Holley, of Gunslinger, and Jamie Russell, of The Suds, as others look on, at a performance workshop at ReFuel, Dunedin this week. Photo by Peter McIntosh.

Workshops on everything from songwriting to performance will come in handy for a group of Dunedin bands when they go on tour this weekend.

Eight bands, under the Chicks Project, will perform at three free all-ages gigs in the greater Dunedin area.

The project started last year under Volunteer Otago and aimed to provide young musicians with an opportunity to perform at alcohol-free events and learn from music-industry mentors.

Funded by the Alcohol Advisory Council, the programme involved 10 high school bands and was now run by the Dunedin Fringe Festival.

Co-ordinator Michelle Anderton said the bands had taken part in workshops over the past six weeks and were looking forward to performing on tour.

"It is a bit different, but that's the angle they are trying to go for this time around.

"It really puts the onus on them to get their stuff together, be on time and be efficient," she said.

The band members, who range in age from 15 to 18, were involved in everything from designing the posters and promoting the events, to stage management.

Each band would play a 20-minute set at the gigs 6.30pm at ReFuel tomorrow, 2pm at the Fire Station Theatre in Mosgiel on Sunday, and 2pm at the Waitati hall on Monday.