By David Loughrey
2 Comments
The latest connection in a cycle/walkway that will link Dunedin with Port Chalmers had its first try-out yesterday.

The Leith Bridge, by the Forsyth Barr Stadium, opens tomorrow, but barriers were removed for a short time yesterday afternoon. 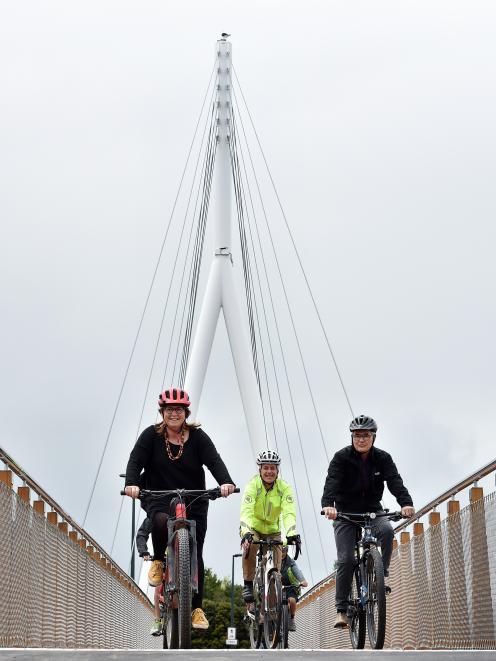 Mayor Dave Cull described the event as "a soft opening". He said it was good the bridge would be able to be used over the holiday period

He was pleased with the design, with its tower shaped like bicycle forks.

` I think it's actually a very elegant bridge - it's lovely, "

Mr Cull said the connection with the city - which was expected to run alongside the railway lines to the Dunedin Railway Station - was critical.

"We've still got disparate and disconnected parts of the network, and it will be a quantum leap in service when we actually get them connected."

Council transport group manager Richard Saunders said he was "really happy" to have the project completed by Christmas.

The bridge was "far better" than what had gone before, a route that ran under and around the road and rail bridges nearby.

"We're really hopeful it will be positively received by everybody."

Council infrastructure services and networks committee chairwoman Cr Kate Wilson said she was delighted to see the bridge completed before Christmas, as the public could use it over the holiday period.

The bridge cost about $1.4million. The NZ Transport Agency provided 66% of the funding, and the council the rest.

Work on an NZTA link between St Leonards and Port Chalmers is expected to begin next year, and to open in 2022.

Hopefully the cyclist behaviour in the photos isn't indicative of what we can expect going forward.

Great to see some good urban form rather than just a functional bridge - well done to all, especially to have this ready for the holidays!