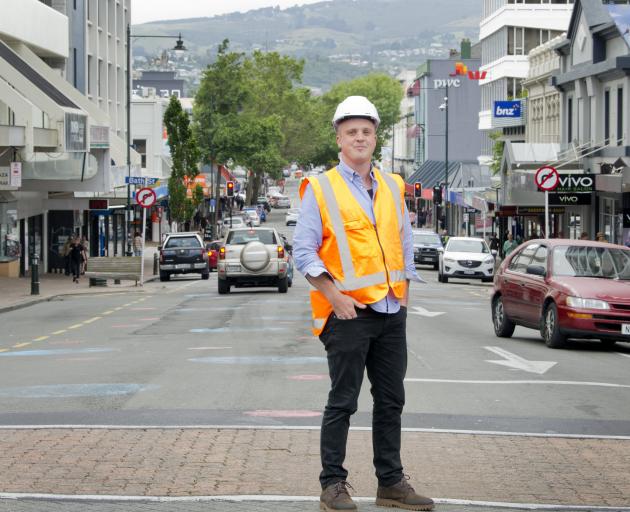 Redeveloping George St in Dunedin is one major project Josh von Pein will be tasked with keeping on track. PHOTO: CHRISTINE O’CONNOR
The man who will be in charge of major projects in Dunedin says listening and clear communication are crucial for establishing widespread support.

Josh von Pein will lead the Dunedin City Council’s Major Project Office from next month and he is looking forward to tackling such projects as the redevelopment of George St, Dunedin’s main shopping street.

"It is a critical part of the city and it’s important we get that project right, so we’ll be working hard to ensure we do."

The concept design for George St — about which there has been much community disagreement — was completed recently, but further planning and design work will be carried out before construction starts.

Two other high-profile appointments announced by the city council, Dougal McGowan and Glen Hazelton, will also be involved in the George St upgrade.

The appointments signal a shift from the council to bring more expertise in-house since the project office started in 2018.

Dunedin City Council chief executive Sandy Graham said consultants with expertise in project delivery were initially brought in to run the office, but a transition was now under way.

The appointments of Mr von Pein and Dr Hazelton within the office and Mr McGowan in economic development were the first step.

“This is a clear signal to the community, including the business community, of our intent to be better when it comes to the management and delivery of major projects,” Ms Graham said.

Dr Hazelton would work with groups and businesses to make sure projects were delivered in a way that best met their needs and those of the community.

"As a career civil engineer, this is a great opportunity to test and use my skills on such a diverse range of complex projects that will deliver so many benefits to my home town," Mr von Pein said.

His career had been varied.

As a validation engineer, he helped to ensure preparations for the London 2012 Olympic Games were rigorous.

He has since worked as a consultant for the World Bank and as an adviser for the Cook Islands Ministry of Infrastructure.

Closer to home, he worked for Beca as a senior civil engineer from 2014, then for the Dunedin City Council as transport delivery manager from 2017 and principal procurement manager for the NZ Transport Agency from August last year, ahead of his move back to the city council next month.

Mr McGowan, who is signing off as Otago Chamber of Commerce chief executive this week, said it was vital to have close connections between local and central government and businesses.

He starts in his new role on Monday.

Ms Graham said the office should be more cost-effective and nimble after its change of approach.

Other projects, such as the Mosgiel swimming pool and South Dunedin library and community complex, were also progressing at pace, she said.