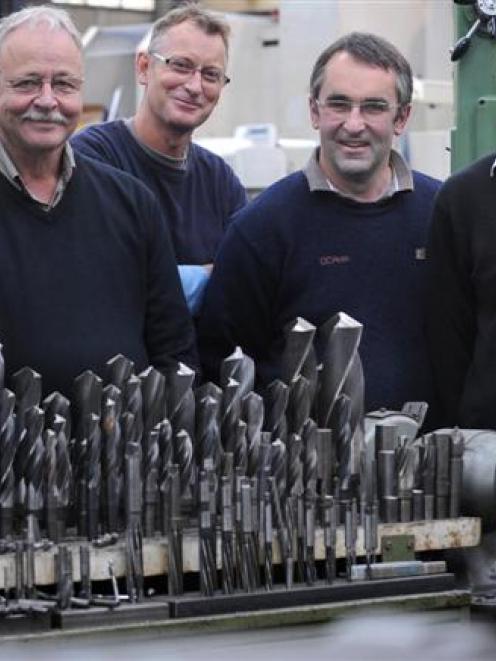 Mr Houliston (63) began his career with the company, DC Ross Ltd, as an apprentice, fresh from Otago Boys' High School, in 1965 and - 45 years later - is still there.

Tool room manager David McConnon and designer Warwick Sims have both put in 28 years and quality co-ordinator Andrew Nicolson joked that he was the "baby", with a mere 25 years of service at the Kaikorai Valley firm.

Mr Houliston had been expecting to say a few words about the efforts of the three long-serving staff at a surprise afternoon tea in their honour.

However, he was "extremely surprised" to find his own name also on the celebratory cake and that others were also intent on publicly honouring his 45-year record with the company.

Among the guests were several former employees.

The business employs 15 staff and manufactures mainly precision metal car parts for export to Australia, China and the United States.

It has its own tool shop, enabling it to create any equipment needed to manufacture car parts.

The firm had built an international reputation for high quality products, had found niche markets and managed to survive, which had been a "huge challenge for a small company" in the highly competitive international auto parts market, he said.

Many of the firm's staff had begun their careers with the firm as apprentices and had stayed on, the stable and high quality workforce proving a major asset, he said.

Mr Nicolson said working for the business over the years had been "a great feeling".

"It's a really family-oriented company.

"And the work's interesting and challenging," he said.

"We get a sense of being one of the last men standing," Mr McConnon added.

"Many other small engineering firms had gone out of business.