A chance encounter with a curious miniature horse has landed a Central Otago teenager a top prize at a wildlife photography competition.

Dunstan High School pupil Megan Hunt (13) was on a summer camping trip with her family when wet weather meant they took a day trip to Oamaru.

It was there she spotted a miniature horse eating grass. She liked the look of the animal so much she took a photo on her phone.

At the time Megan did not think she had just taken an award-winner, but of 1648 votes, her horse photo was awarded the people's choice at the 20th annual Otago Wildlife Photography Competition. 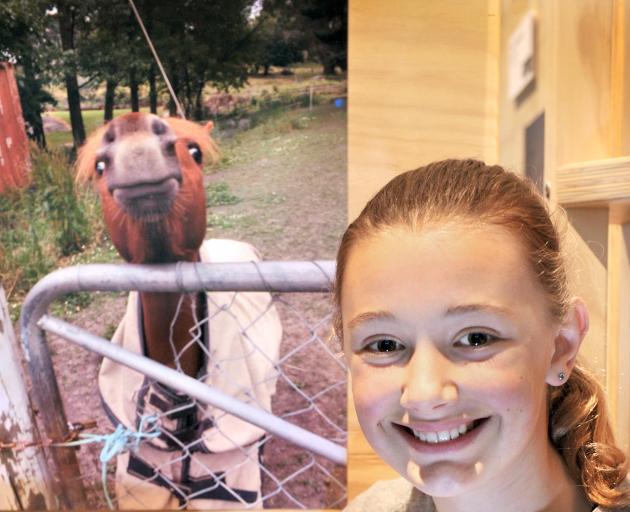 Alexandra teenager Megan Hunt poses next to her photo of an Oamaru horse, which won her the people's choice award at the annual Otago Wildlife Photography Competition. Photo: Christine O'Connor

''I sort of took my phone out and took a picture of it. It was sort of eating grass, then it put its head up wondering what was going on, then sort of looked at me funny.''

It is not the first time her skills behind the camera have been recognised. Last year, her photo of a family of ducks on a pond in Alexandra won the animals 14 years and younger category.

Her photo of a sunset was also displayed in this year's exhibition at the Otago Museum.

The exhibition closes today. More than 23,000 people have visited since it opened in March.

Megan will receive an A3 canvas print of the photo from Jonathan's Photo Warehouse.