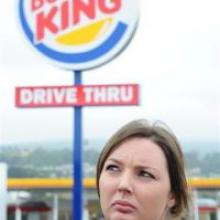 While her comment was "liked" by four Andersons Bay Rd co-workers, it has drawn the disapproval of the fast-food company.

Burger King management, after being given a printed copy of the Facebook page, decided to charge Ms Tyler with serious misconduct, and held a disciplinary meeting at the restaurant yesterday.

"I feel like I haven't done anything wrong," she said.

Ms Tyler, who was supported by Andrew Tait, of Unite Union, met managers of the two Burger King Dunedin stores to discuss the issue.

Following that meeting, Mr Tait confirmed another meeting with company representatives would be held next Tuesday in Dunedin, as the company was seeking further legal advice.

"They don't know how to deal with social media," he said.

The case highlights a growing trend for remarks made on social media sites to rebound on those writing them.

Earlier this week, renegade Te Tai Tokerau MP Hone Harawira posted on his Facebook page that "dickheads" were out to expel him from the Maori Party.

Media commentator Jim Tully, of Christchurch, said people in public life knew items posted on social media could get "picked up" and the same rule could apply to anyone else.

"If you don't accept that, you are living [in] cloud cuckoo land."

University of Otago School of Business (management) head of department Prof Alan Geare said when it came to social media, people would be well advised to remember any posting should be treated "like putting a note on a public noticeboard".

If people were not happy with any comments or photos entering the public domain, they should not post on the internet, he said.

Ms Tyler said she enjoyed and took great pride in her job, which she had worked at since August 2009, but the current situation was "horrible".

"It is very nerve-racking and I feel very uncomfortable, but I go in there with a smile and I do my job ... I just get on with it."

Tension arising from the dispute made communication with management difficult, she said.

Asked if she had faced any previous disciplinary action, she said a previous matter had been dealt with and was the result of a "misunderstanding".

However, Burger King spokeswoman Rachael Allison said: "The employee in question has been the subject of disciplinary action before.

"This is the latest incident which will be dealt with via the usual disciplinary process."

She said the Unite Union had chosen to single out this incident, and it was "lacking in context".

Unite national director Mike Treen said he was not aware of anyone being dismissed from a job for commenting in a private group on Facebook, which he likened to a modern version of a "pub discussion".

"I hope she keeps her job."