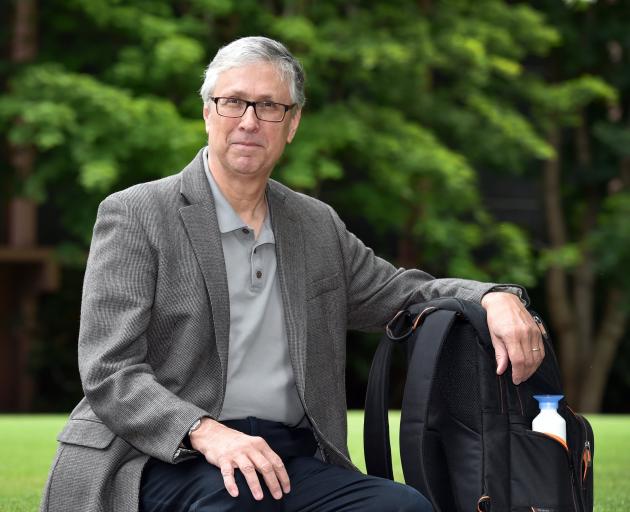 US law professor Tom Tyler, who is attending the Law and Society Association of Australia and New Zealand conference in Dunedin. Photo: Peter McIntosh
Tom Tyler lectures university students about legal theories, but his work is far from theoretical.

As well as teaching law and psychology at Yale, Prof Tyler works with police forces across the United States on ways to improve their relationship with their communities.

Much of Prof Tyler's research studies why people obey the law, and his findings have been put into practical application by police forces and court systems trying to reduce offending and recidivism.

''If people go to court, if they deal with the police, and the experience seems fair to them, they are more likely to accept authority,'' said Prof Tyler, who is speaking at the Law and Society Association of Australia and New Zealand conference in Dunedin tonight.

Trust in the law and the police had been a problem in the US for years, and now that mistrust was reaching a crisis point, Prof Tyler said.

''There is no evidence that policing is any different than it was 10 years ago; what is different is the community push-back. People are asking questions now,'' he said.

''Police in America have got this idea that if we control crime people will trust us and respect our authority, but there is very little relationship between the crime rate and whether people trust the police: the rate of violent crime in America has gone up 75% from what it was in 1970, and public trust in the police is identical to what it was.''

Recent surveys suggested only 60% of Americans trusted their local police force and minority communities were even less likely to trust them, Prof Tyler said.

Most of that mistrust stemmed from what made people trust the police: they wanted fairness when dealing with the system, rather than seeing a punitive system at work.

Prof Tyler defined fairness as giving people a chance to tell their side of the story; neutrality and consistency in legal decision-making; being treated with respect and being motivated by a desire to do the right thing.

Those four factors, rather than a fear of being caught and punished, encouraged people to trust police and to obey the law.

''We have done research where we train the police to treat people more fairly and we have seen measurable effects,'' Prof Tyler said.

''We have seen if you can create a climate where there is more perceived fairness, there is more trust and you can see increasing co-operation with police and declines in crime and increases in clearance rates.''