From far and away they came to show they dare 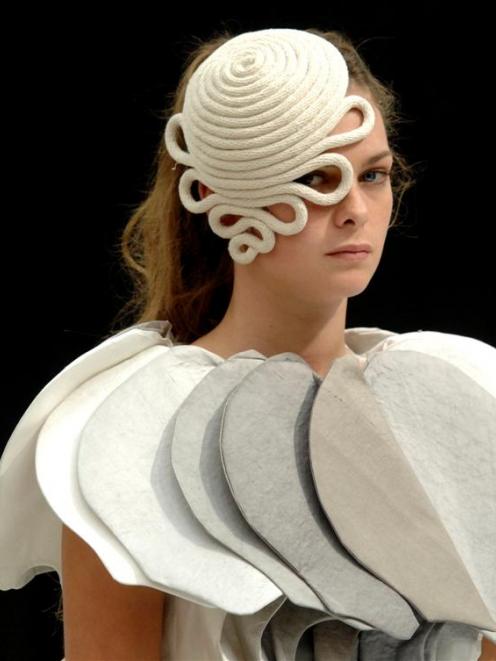 Ali McD Agency model Mary Smith wears one of the garments by Royal Melbourne Institute of Technology graduate Jon Cardiano in his collection, "I tie you up to let you fly away", at the iD International Emerging Designer Awards judging yesterday. Photo by Linda Robertson.
Sometimes fashion is all about taking risks, though many of the 28 iD International Emerging Designer Awards finalists are taking a bigger gamble than others.

They have paid their own way to travel to Dunedin in the hope of making a name for themselves.

The event, now in its eighth year, continues to attract design talent from as far afield as Austria, Croatia and Canada, with each going before a panel of judges yesterday.

Among the emerging designers who travelled the greatest distance was Julia Klein-Klute, of Germany.

The 31-year-old studied at Switzerland's University of Applied Sciences, where she crafted her graduate collection, "You are not lost, you are here".

It cost her "quite some money" to come to Dunedin, but she combined it with a holiday in Melbourne, and believed the experience would help her grow.

"I don't expect to win, I just think it's a great experience. It's the experience to meet people, see other collections, as well as being judged. It's really good to get more professional."

Miss Klein-Klute knew a bit about New Zealand fashion before she came here, and while iD was a "small festival", she appreciated how diverse the designers were.

"There was one girl in my school who was here two or three years ago, and I lived in Melbourne for one year, so I know a bit about the Australian and New Zealand fashion scene. I really like New Zealand and I really like Australia so I just decided to give it a go."

On the other hand, Royal Melbourne Institute of Technology graduate Jon Cardiano knew nothing about iD until after he had applied for the awards.

He saw the awards were being judged by a panel of international guests and jumped at the opportunity to be involved.

"It's all about networking and, at the end of the day, I just love doing shows. It's been good to be doing something I love, but also a little bit out of my comfort zone," he said.

Mr Huxley was "very impressed" with the collections and promised the audience would "enjoy" tonight's show.

He appreciated those designers who used good fabrics, paid attention to detail, sewed impeccably and had a professional attitude towards innovation and creativity.

However, there were others who required more guidance.

"The thing is that when you see a collection come down the runway, you can tell straight away if they should keep walking out the exit or they should stay and talk about it," he said.

The awards were a lesson for graduates and Mr Huxley believed they appreciated constructive comments, including one designer who was told to ditch a look because it did not fit with their collection.

"I'd hate to come into a competition and get no feedback, even if it's a bit negative. What we are trying to do is make for a good parade."