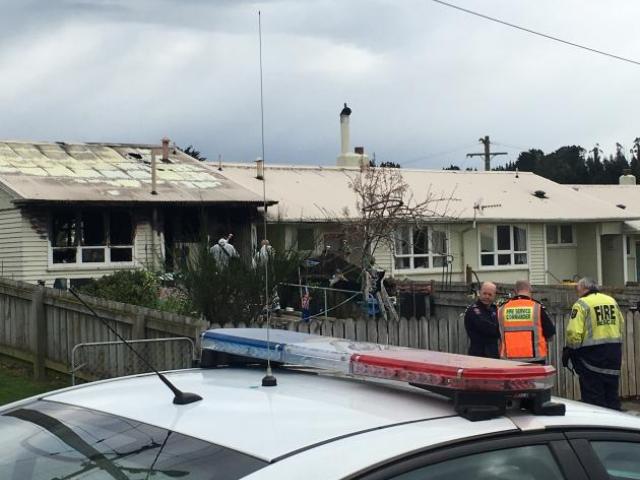 The Housing New Zealand flat was one of four at the site in Brockville. Photo: Craig Baxter
There are no suspicious circumstances surrounding the house fire in Brockville that is believed to have killed a Dunedin man, police say.

Detective Sergeant Dylan Ross, of Dunedin, said the police did not consider the incident that happened on Friday as suspicious.

Scene cordons at Nutsford St were removed yesterday and people could be seen removing property from the Housing New Zealand flat which was gutted by fire about midnight on Friday.

The postmortem on the body which was discovered by firefighters extinguishing the blaze, was carried out yesterday morning.

Police were yet to comment on its findings or the identity of the person killed.

"The victim has not yet been formally identified," Det Sgt Ross said.

The results of the postmortem would be sent to the coroner, he said.

"Police will continue to investigate on behalf of the coroner."

Questions as to the man's identity, the cause of the blaze and reports by neighbours of a friend of the occupant of the flat went unanswered.

Neighbours said the flat's occupant, a middle-aged man who used a wheelchair, had been drinking with a friend in the hours before the blaze.

The man was seen to leave the area soon after emergency services arrived.

In yesterday's Otago Daily Times it was incorrectly reported the fire was deemed suspicious. Police are yet to comment on the cause.