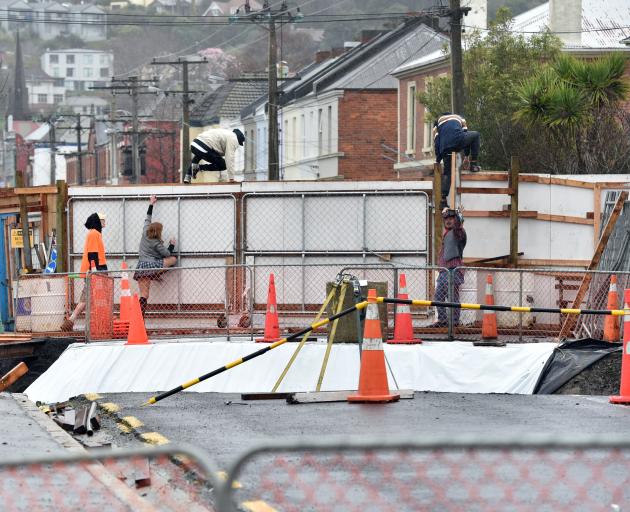 Students climb the Dundas St Bridge barricades on Saturday. PHOTO: PETER MCINTOSH
Despite about 1400 Dunedin residents signalling they would "storm" the Dundas St bridge construction site at 5pm on Saturday, only four people showed up.

They pulled themselves up the tall fence, looked over the top, then dropped back down and left.

Earlier in the day, small groups tried to scale the fence around the construction site on their way to the Agnew St Party, but were turned away by police.

The Otago Regional Council worked with the University of Otago, Otago Polytechnic, police and security contractors to maintain the safety of the site.

But in the end, it seems Mother Nature did the job for them by serving up cold, wet weather.

A social media event page encouraging people to attend, expressed frustration at the continued closure of parts of Dundas St because of flood works by the council.

"On the second Saturday of August, we band together to bring down the great Dundas walls of oppression ... If the bridge will not finish in time, we will make it open in time," the message read.

The page was a reference to the social media event "Storm Area 51, They Can't Stop All of Us" which is due to take place on September 20.

It has a short and vague description, including the line: "Let's see them aliens".

Last month, ORC operations general manager Gavin Palmer said the council appreciated the humour of the Dundas St event and understood it was a response to frustration about the bridge being closed.

But Mr Palmer warned residents it was unsafe to unlawfully access the work site because there were gaps in the bridge that people could fall through, which could be lethal.

The work, originally due to be completed this month, has been extended until October because of unforeseen additional works.

However, the council said, it would make an effort to open the bridge for the use of pedestrians earlier, if that was possible.