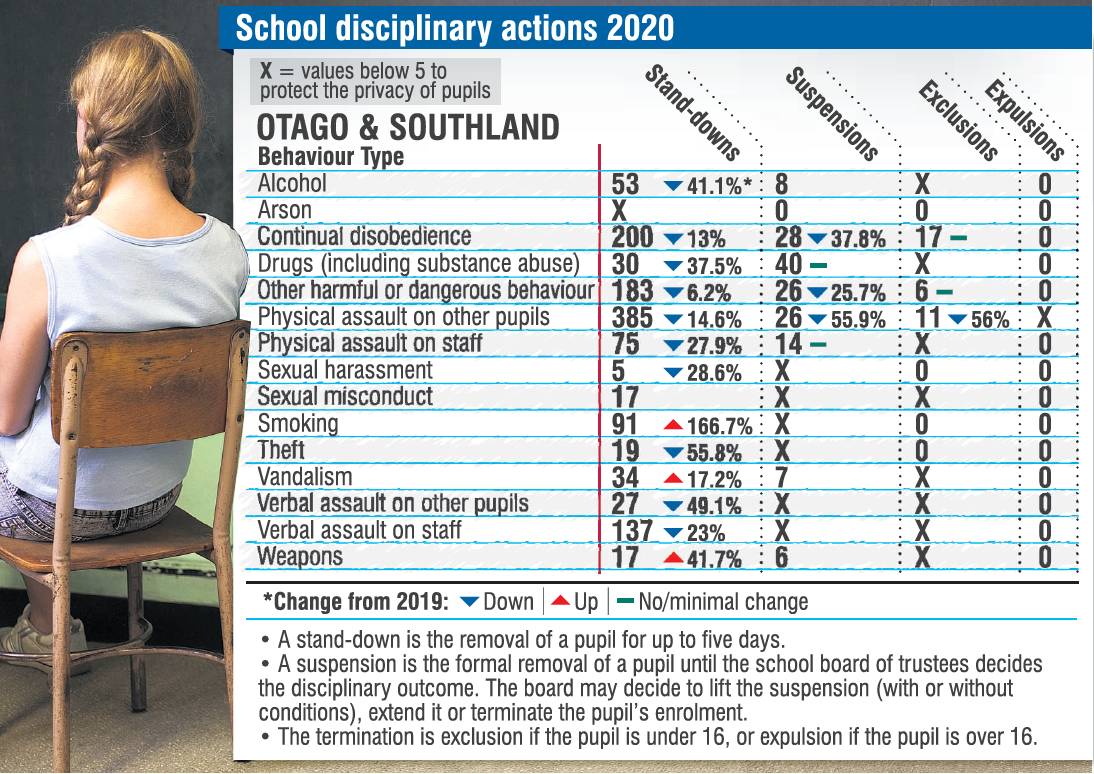 Last year’s Covid-19 lockdown is believed to be behind Otago and Southland schools recording some of their lowest numbers of stand-downs, suspensions, exclusions and expulsions in the past five years.

While data released by the Ministry of Education under the Official Information Act showed there was an increase in standdowns for sexual misconduct, smoking, vandalism, and use of weapons in 2020, there had also been significant decreases in alcohol, arson, drugs, physical assaults on staff and pupils, and verbal assaults on staff.

Suspensions for sexual harassment, vandalism and weapons related incidents increased marginally last year, but the number of suspensions handed out decreased for the majority of categories.

Continual disobedience, physical assaults on other pupils and verbal assaults on staff resulted in the lowest number of suspensions in the past five years.

The number of pupils excluded from school had also dropped significantly, compared with those recorded in the past five years.

The main reasons for exclusion last year were continual disobedience, physical assault on other pupils, and ‘‘other harmful or dangerous behaviour’’.

And the number of pupils expelled from school dropped to fewer than five—again the lowest number in five years.

They were for assaults on other pupils.

Ministry of Education enablement and support sector deputy secretary Katrina Casey said it was too soon to say whether the Covid-19 lockdown had had an impact on the statistics.

But Otago Secondary Principals’ Association secretary Gavin Kidd believed it was a major contributor to the decrease in disciplinary measures being placed on school pupils.

He said teachers might have been more tolerant of some behaviours because pupils were under a lot more stress than usual.

However, he noted the 166.7% increase in the number of standdowns handed out for smoking in the southern region, and said it was possible it related to stress or being at home for longer periods with parents who smoked.

Mr Kidd was pleased there had been declines in most categories — particularly in assaults on staff and other pupils — but said teachers and principals were still concerned the number of assaults remained high.

‘‘This year will be a very interesting one because of the impact of Covid last year, and its continuing impact among students, in terms of anxiety and uncertainty.

‘‘Will that declining trend continue?

‘‘I don’t think that schools will relax their standards because of Covid. Schools will continue to try to be consistent.

‘‘But because of the nature of schools working on wellbeing to support their students, that may have contributed to less students being disciplined.

‘‘Hopefully that work continues to pay off.’’