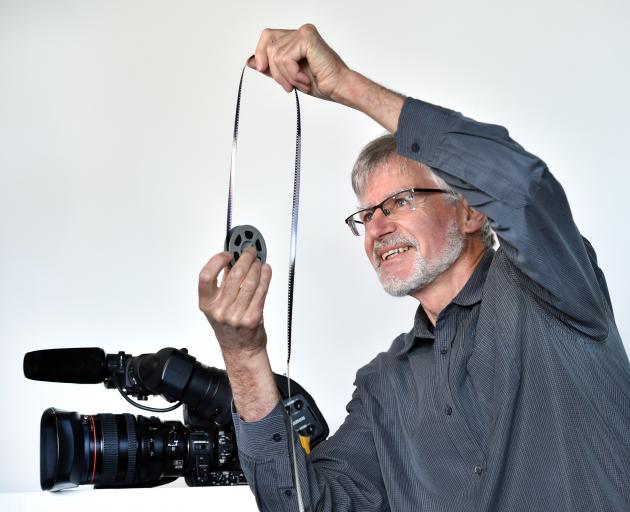 "I retired in April, but it’s been a bit of a pseudo-retirement because I immediately got rehired to go and shoot a nine-week documentary in Brazil.

"I only recently got back from that. It was pretty amazing for me to do that.

"In effect, I’m freelancing. I’m 69 now, but I still don’t feel like I’m ready to give it away after all these years."

He has spent the past 52 years in film-making, 30 of them with NHNZ, making documentaries for the likes of Discovery Channel and National Geographic.

His career started when he was 17, as a trainee cameraman for the New Zealand Broadcasting Corporation, filming news, current affairs and even Country Calendar.

Later, he filmed landmark television dramas such as Hunter’s Gold, before moving into directing and producing children’s television programmes.

Then in 1987, he joined Dunedin’s Natural History Unit (now NHNZ).

It was during 1991 that he had what he describes as a "life-changing" year, when he was given the rare opportunity to spend the winter in the Antarctic making a series of films.

"It’s probably the thing that I’m most well known for."

Since then, he has visited the Antarctic and Arctic several times, and his filming of the wildlife there has cemented his reputation as one of the most experienced polar film-makers on the globe.

He said life on the icy continent was extremely challenging and anyone working there had to be really adaptable.

"In this job, sometimes you’re just staying in rough little huts or tents out in the wilderness, in temperatures well below minus 50degC.

"It’s so cold that you can do this trick where you literally throw a cup of boiling water into the air, and it immediately turns to ice.

"That gives you an idea of how cold it can get down there. And of course, that affects your equipment as well, especially when I was doing the winter in 1991.

"The cameras were all analogue. They had tape mechanisms and anything with moving parts were always difficult to deal with in the cold."

Operating the equipment was also difficult when wearing several pairs of gloves, he said.

While it was unpleasant at times, it was worth it.

"I’ve filmed polar bears with cubs, I’ve been whaling with the Eskimos, been out with the Sami reindeer herders — it’s been a hell of a ride really."

Recently, he was made a life member of the New Zealand Antarctic Society for his work on the icy continent.

Mr Quinn said the best part of pseudo-retirement was, he could pick and choose which projects he wanted to be part of.

In between freelance filming, much of his time is now spent visiting his grandchildren more, and writing a book about his filming experiences.

He hoped the book would be published next year.