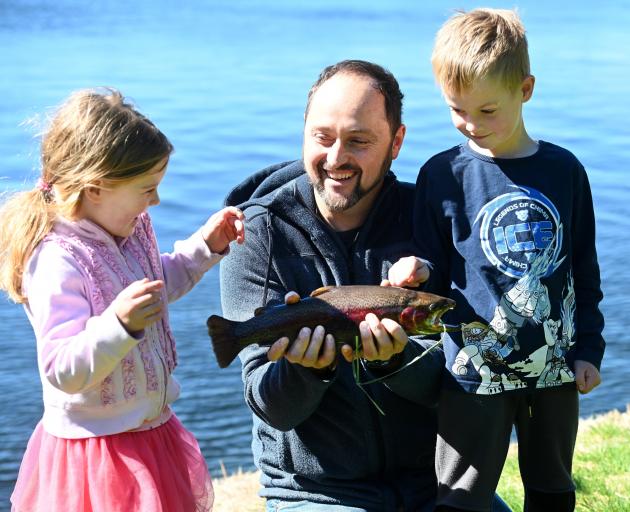 Looking forward to a fish dinner are (from left) Arah, Matthew and Fletcher Parks, of Allanton, at Fish & Game’s Take a Kid Fishing event at Dunedin’s Southern Reservoir on Saturday morning. PHOTO: LINDA ROBERTSON
This fishing lark is easy.

You could not blame 5-year-old Arah Parks from thinking that when her first-ever cast resulted in landing a 1.36kg rainbow trout.

Arah was at Dunedin’s Southern Reservoir on Saturday with brother Fletcher (7) and dad Matthew Parks for the second weekend of Fish & Game’s annual Take a Kid Fishing event.

Entranced by the kaleidoscope of colours emblazoned on the fish, Arah decided to return her fish to the depths of the reservoir.

However, soon after Fletcher hooked his own fish which was not to be so lucky, destined for the Parks’ dinner table.

Mr Parks said he had enjoyed fishing in his youth and the weekend’s festivities had hooked his children.

"This is awesome, because the kids want to get into fishing now."

Fish & Game officer Steven Dixon said he thought the weather on a windy Saturday afternoon might have scared a few families off, but people turned up and "the fishing’s just been magic today".

Conditions had been good and the fish were biting, as children had a catch in their first few casts, in many cases.

Mr Dixon admitted with a chuckle that Saturday’s smorgasbord of fishing might be setting up an unrealistic expectation of the entire fishing experience, but ultimately he wanted families to enjoy the outdoors and be able to experience catching a fish.

"There’s plenty of happy smiling kids, and even parents."

The four days of fishing had been completely booked out over two weekends, and could have accommodated more families if Alert Level 2 restrictions had not capped numbers at 100 people per day.