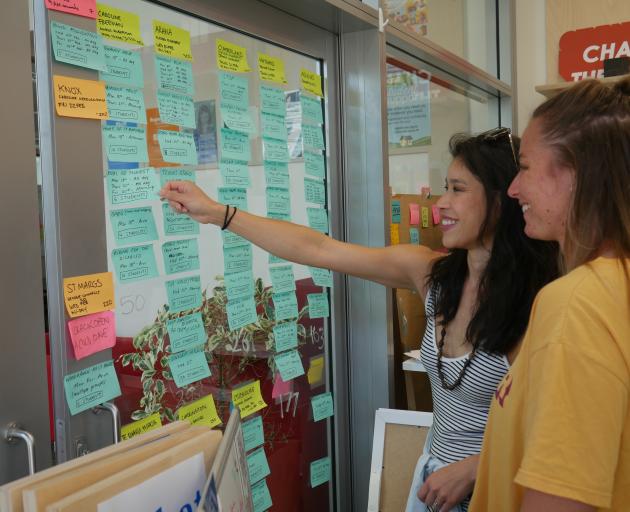 University Volunteer Centre manager Sze-En Watts (back) and college volunteering assistant Maddi Mitchell organise volunteers to help community groups during O-Week. PHOTO: JESSICA WILSON
Volunteering may not be the "welcome party'' first-year University of Otago students initially had in mind, but 1300 of them have signed to help Dunedin's community groups.

In a bid to build connections and welcome them to the city, the University Volunteer Centre teamed up with 10 residential colleges to match students with groups that need a hand during O-Week.

UVC manager Sze-En Watts said this was the most volunteers to sign up since the centre got involved.

Previously, the highest number of students was about 700, she said.

"Over the past five years that involvement from colleges and the students has increased significantly.''

She and college volunteering assistant Maddi Mitchell were tasked with sourcing projects the volunteers could help with.

Community groups filled out a project form and identified what positive social and environmental impact the students would contribute, she said.

"It's not just about the activity, it's about the bigger picture that they're going to be a part of.''

The majority of students had been allocated a project, but there were still about 150 who were available on February 20.

Miss Mitchell said there was a "massive range'' of jobs already lined up, from coastal clean-ups and weeding, to painting and maintenance.

One group will also be putting on a performance at a rest-home.

Ms Watts said since about 80% of students did not come from the Otago-Southland area, volunteering was a good way for them to get the know the city.