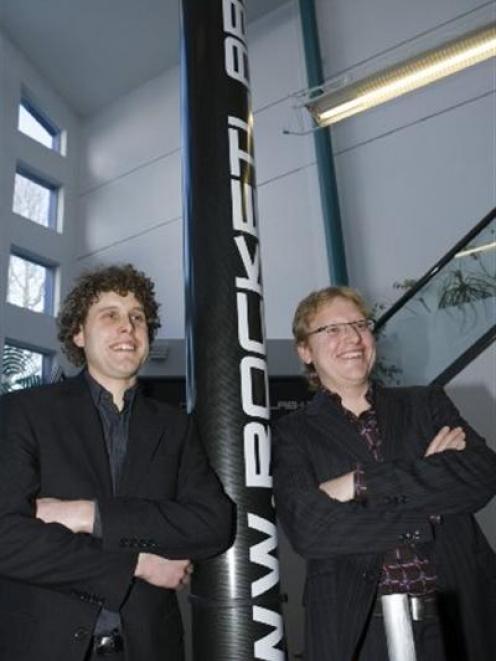 Rocket Labs technical director Peter Beck (left) and business development director Mark Rocket at the unveiling of a mock-up of the Atea 1 suborbital space rocket in August. Photo by NZPA.
The "brains" behind last week's space-rocket flight from Great Mercury Island, off the Coromandel coast, did his rocket-building "apprenticeship" at the former Fisher and Paykel plant near Mosgiel.

"They were right in behind.

"They drew the line at me making rocket propellant on site, but just about everything else they were really supportive of."

In 1995, he moved to Dunedin, to take up a tool and die-making apprenticeship at Fisher and Paykel.

He started dabbling in rocket power "basically, the day I arrived at Fisher and Paykel because, all of a sudden, I had the resources to be able to do it".

"I'd be trying to build a piece of my rocket and I'd go into the engineering store and say to Trevor, 'Hey Trev, can you get us a price for a piece of titanium, say yay by yay?' And he'd say 'yeah, no problems, Pete'.

"And a couple of days later a piece of titanium would just arrive in my tool box labelled 'apprentice training project'.

He always had an interest in science and astronomy and had "mucked around with cars" from an early age.

"But I just wasn't satisfied with the power output of the internal combustion engine.

"There had to be a better way."

Mr Beck built a rocket bike and demonstrated it to the board of Fisher and Paykel in the company car park.

"I'd lie down on it, essentially - lie right down on it, with the propellant bottles between my legs.

"The only way I could get the centre of gravity low enough was to use BMX wheels."

About 2000, he demonstrated the bike on Princes St, at the Festival of Speed, accelerating from zero to 140kmh in just under five seconds.

"It was quite funny, because I couldn't apply the BMX brakes because the surface speed of the wheels was just too high and the brake pads just melted.

"You had to sit up and let the wind slow you down for a bit and then you could start applying the brakes."

During his eight years in Dunedin, Mr Beck had become "pretty serious" about rocket propulsion and was producing his own hydrogen peroxide rocket fuel.

He went on to work on the design of superyachts and spent five years working for Crown-owned Industrial Research Ltd, before setting up his own company.

"I reached a point where it was time to do something, so I formed Rocket Labs, quit the day job and managed to secure investment to be able to start the [space] programme."

He sold half to investor Mark Rocket.

He agreed it would be fair to describe him as "the brains" and Mr Rocket "the money" behind the venture.

He told the Otago Daily Times he still hoped to recover the missing payload from last week's flight.

The melted metal fins of the booster stage, which had been recovered, confirmed the rocket had heated to more than 600degC, so it must have travelled at almost Mach 5, or hypersonic speed.

The flight had screened on the BBC and CNN and the company was talking to "payload customers".

Another flight is planned for early next year.