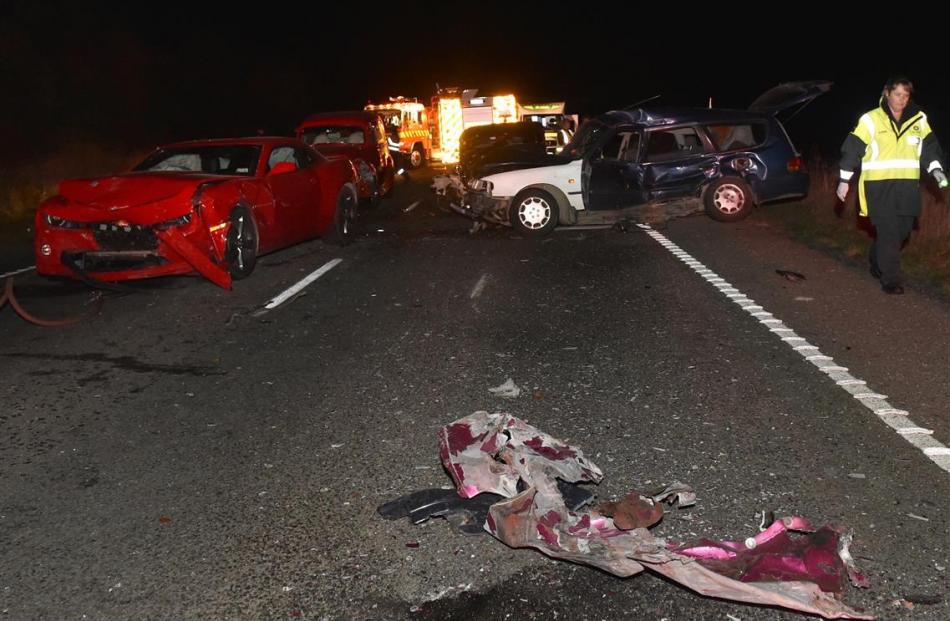 The scene of a fatal crash on State Highway 1 near Karitane last night. Photo by Peter McIntosh.

A 64-year-old Kaikoura man killed last night in a five-car crash north of Dunedin that injured six others was heading south to take part in a car rally in the city.

While the Hurricane Rodders Mid Winter Run would still go ahead, organiser Brian Fitzpatrick said, when contacted, there were "a few tears'' at an event opener last night.

People involved but unhurt in the crash had turned up at the event and agreed it should continue.

"We were waiting to hear from them before we decided.''

Four "hot rod cars'' had been damaged or written off and the death had put a damper on the event, he added.

The crash, first notified at 5.46pm, also left another person critically injured, one seriously injured, and a further four people with minor to moderate injuries.

The crash blocked State Highway 1 at the intersection of Apes Rd, about 5km south of Waikouaiti, on a busy Friday night as Queen's Birthday Weekend holiday-makers left Dunedin.

Damaged vehicles, two of which were custom cars and one a later-model sports car, were strewn across the highway.

A station wagon was badly damaged by the side of the road and another vehicle was down a bank.

Two people with moderate injuries were taken to hospital by ambulance.

The remainder did not need hospital treatment.

Emergency services personnel told the Otago Daily Times at the scene that while the cause of the crash had not been ascertained, it appeared one vehicle had crossed the centre line on a corner.

Long lines of banked-up traffic stretched both north and south before vehicles were rerouted along Coast Rd.

● A man and a pregnant woman were injured in a two-vehicle crash on State Highway 1 in Northland last night.

The Fire Service was called to the crash at a passing lane north of Kaiwaka just before 7pm.

The man had to be cut out of the vehicle after receiving serious injuries in the crash.

The pregnant woman had leg injuries.

Debris was scattered on the road for 100m.

There were no diversions in place, but traffic was delayed for the next hour.

St John was also at the scene, a Fire Service spokeswoman said.