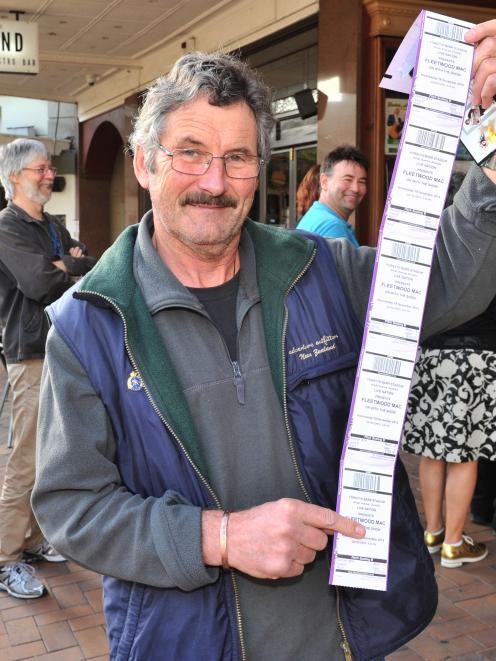 Live Nation Australasia chief executive Michael Coppel said it was ''hugely gratifying'' to have Fleetwood Mac's Dunedin concert on November 18 sell out in less than an hour after tickets went on sale at 10am yesterday.

More than 28,000 tickets were sold but a second Dunedin show was unlikely, Mr Coppel said.

However, the entertainment company was working to make more tickets available for the South Island show and hoped to have ''good news'' to announce in a couple of weeks.

''The unbelievable response to the reunited line-up has made this the biggest concert event of 2015,'' Mr Coppel said.

Concerts at Auckland's Mt Smart Stadium on November 21 and 22 will complete the New Zealand leg of the band's On With The Show world tour.

The concert was the quickest event to sell out in the stadium's history.

The 2011 Elton John concert attracted about 34,000 people because ''level four'' seating was used, which was not sold for Fleetwood Mac, he said.

Mr Coppel declined to say whether tickets for level four would be sold in the future.

He was third in the queue and a woman at the front of the queue had waited for four hours.

Mr Tallentire unsuccessfully tried to buy tickets in an online presale on Monday, but the TicketDirect website crashed.

Yesterday, he bought five tickets for seats on the stadium turf for more than $200 each.

''The pension will cover it,'' he laughed.Most of the fans in the queue wanted seats in the stand, rather than on the pitch, due to fears audience members would stand to dance and obscure their view.

Another Dunedin fan, Annie Robinson, missed out on the four tickets she wanted to buy yesterday.

She tried to get tickets online and waited for more than an hour in a virtual queue on the TicketDirect website yesterday.

Dreading the thought of missing out, she left her computer and fled her Dunedin workplace for The Regent, only to be told the concert had sold out.

''It's sad because Fleetwood Mac are not going to come here again, are they? I'm a bit gutted.''

The concert will mark the band's first appearance in New Zealand since 2009, and comes after the group cancelled three Auckland shows in 2013 because John McVie was undergoing treatment for cancer.

Promoters of other concerts scheduled for the Dunedin stadium - Rod Stewart (April 11) and Neil Diamond (October 24) - did not reply to requests for ticket sale figures yesterday.

The ODT understands more than 20,000 tickets have been sold for both the Stewart and Diamond concerts.