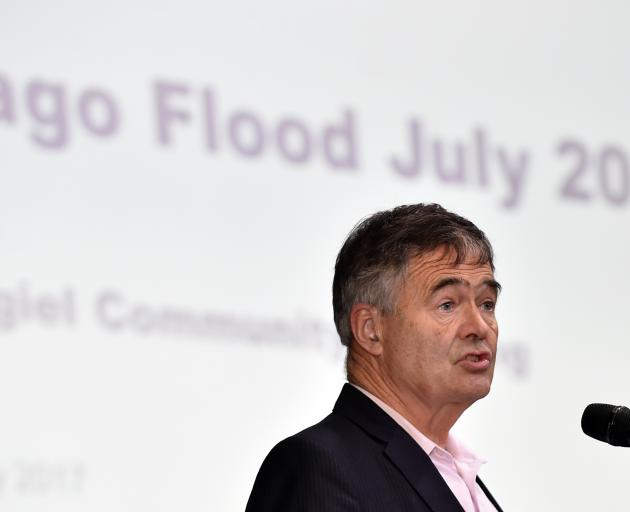 Dunedin Mayor Dave Cull speaks in Mosgiel last night. Photo: Peter McIntosh
Taieri residents sick of their homes and properties being flooded are fed up with being ignored by local politicians.

Dunedin Mayor Dave Cull and other local government representatives at a flood recovery meeting in Coronation Hall last night acknowledged more could be done to protect residents in some areas and promised to try to address the list of issues raised.

However, solutions could come at a significant cost to the Dunedin City Council, Otago Regional Council and the city's residents.

Mr Cull finished the meeting by saying councils and the community would face ''very serious conversations about some very serious investment''.

It would not be enough to upgrade infrastructure to meet the threat posed by today's climate, as climate change would make serious weather events more common.

''[Infrastructure is] going to have work for the next 30 years in conditions that are possibly going to get a hell of a lot worse than they have been.''

Difficult choices would have to be made about what level of protection the community wanted and at what cost.

This could involve decisions in the $200million to $300million range, which Mr Cull said was not an exaggeration.

Earlier, residents of the flood-hit area pointed the finger at both the DCC and ORC for failing to properly invest in enough infrastructure despite repeated calls for more work to be done.

They said the DCC in particular had failed to keep pace with out-of-control growth as subdivision after subdivision in Mosgiel and Outram was approved.

The ORC was criticised for failing to properly maintain its flood protection schemes and for not coming up with an achievable solution to how flood-prone Henley could be protected.

Residents spoke of the frustration of dealing with flooding on a regular basis, with one Henley resident saying he was so fed up he and his wife planned to abandon their property.

Carlyle Rd, Mosgiel, resident Murray Hamilton said he had lived in the same house for 44 years and believed he had had sewage inundate his property 20 or 30 times.

He said the council was at fault for issuing consents for developments but failing to invest in infrastructure.

''I want something done about it.''

City council chief executive Sue Bidrose said the council was bound by its district plan and some of the consents had been issued after developers appealed to the Environment Court.

Infrastructure networks general manager Ruth Stokes said the council would look at a range of issues but reminded residents it only had a limited resource and ''infrastructure changes don't take five minutes''.

Its staff had been working ''full time'' on finding solutions to problems raised about South Dunedin's infrastructure in 2015 and were only at the point of assessing the feasibility of different options, Mrs Stokes said.

''We still have works planned from the 2009 floods that saw Queens Gardens under water.''

Henley resident Kerrie Hooper, who was chest-deep in water when he left his property, questioned whether anything could be done to prevent serious flooding happening again in the flood-prone community.

After the meeting, he said he did not believe a solution was possible and he and his wife would likely abandon their property.

Another Henley resident accused the ORC of presenting Henley residents with a solution far too expensive for them to afford while ignoring cheaper solutions.

After the meeting, Mr Cull acknowledged there had been ''growing pains'' in Mosgiel.

''We have had more development in Mosgiel than other parts of Dunedin and there is some obvious stress points.''

The cost of dealing with issues on the Taieri Plain and in areas affected by the 2015 flood was a worry, but communities around the country faced similar problems.

These issues were compounded by climate change and questions needed to be asked about whether the Government should step in to help fund ''really expensive'' solutions.

Community awareness of the risks of living on a flood plain always seems to be low.
I think that we do a bad job of education on what "flood defenses" actually do.

A stop bank, or levee will only ever provide protection up to a certain level of flow.
There appears to be an expectation that having 'some' flood defense will actually lessen the severity from a super-design rainfall / river flow.

This is not the case.
Once a flood over tops a stop bank, there is effectively the full impact from that event on the 'protected' land.

The only benefit is that it delays the onset of damage up to the point that it over-tops.
The potential downside is that the receding water could take significantly longer to clear than if the stop banks were not there.

The floods are as a result much less frequent, but when the big ones come, they feel like they hurt that much more.

Mr Cull must be really annoyed with the storm and its outcome. Instead of being able to bask in the glory of being made head of the local govt body, he is forced to meet ratepayers and explain why flood protection isn't as high a priority as building bike tracks.
Welcome to reality land Mr Cull. DCC should be spending the $50-60 million being demanded by the bike lobby on extending flood protection. Climate change is upon us and DCC should be spending money protecting citizens assets, not pandering to a tiny hobby group.