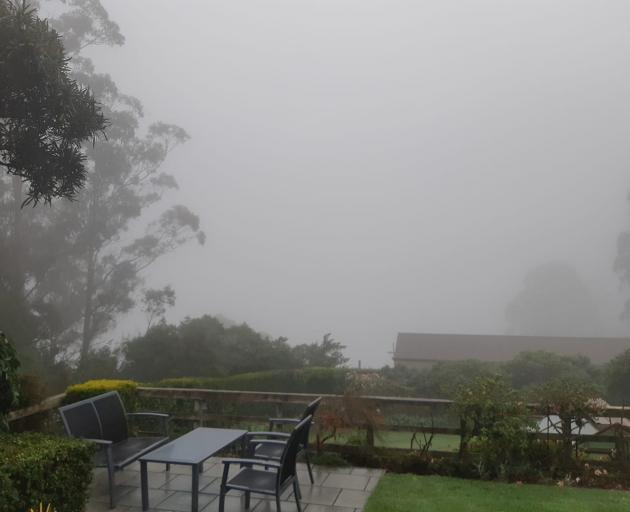 It was a murky morning at The Cove and Otago Harbour was out of sight. Photo: Paula Cooper
Road users in the South are warned to watch out for fog on their travels today. A heavy rain watch remains in place for eastern Otago, and snow's on the way for Canterbury.

A Central Otago District Council spokeswoman said there is a combination of wet and dry roads across the district with patches of thick fog.

Watch out also for ice on bridge decks, shaded areas and hill sections. These have been gritted and crews will continue to patrol this morning.

The Queenstown Lakes District Council said this morning that freezing fog has been reported from Frankton to Arrow Junction, Albert Town to Hawea and State Highway 85 Omakau to Kyeburn.

Fresh grit has been applied to Shotover Bridge and Arrow Junction.

Dunedin was also looking pretty misty and murky this morning. Remember to drive to the winter conditions, and reduce speeds accordingly.

Low pressure spinning off the West Coast will result in an unsettled Sunday across much of NZ.

Waves of showers will move across the North Island, while steadier rain will develop in the lower South Island. 🌧️

A heavy snow warning has also been issued for inland Canterbury, north of Twizel, south of Lake Sumner, to about 400 metres overnight on Sunday and Monday morning, with periods of heavy snow above 700 metres.

MetService said a complex low and associated fronts would affect the South Island on Sunday before moving slowly northeastwards during Monday.

"These weather features are expected to bring periods of heavy rain to eastern parts of the South Island during Sunday and Monday, and snow to inland Canterbury. A heavy rain watch remains in force for eastern Otago, and now includes southern part of Canterbury."

Periods of heavy rain have been forecast for Dunedin and North Otago,  mainly within 20km of the coast, from 2pm to 9pm on Sunday.

In Canterbury about and south of Darfield, heavy rain was expected from 2pm on Sunday until 6am on Monday.

In Fiordland, rain was expected to become widespread on Sunday afternoon, before easing at night.

On Monday, the rain was forecast to clear and it would become fine in the west and north of the South Island, but showers would remain about the Kaikoura Coast. Occasional rain elsewhere, MetService said.

Snow showers have been forecast for some alpine passes in the South Island.

Porters Pass (SH73)
From 2am to 11am on Monday, 8cm to 15cm of snow may accumulate near the summit, with lesser amounts to 500 metres.

From 2am to 11am on Monday, 3cm to 6cm of snow may accumulate near the summit, with lesser amounts to 500 metres.

Lewis Pass (SH7)
From 9am to 2pm  on Monday, 1cm to 2cm of snow may accumulate on the road near the summit, with lesser amounts to 600 metres.