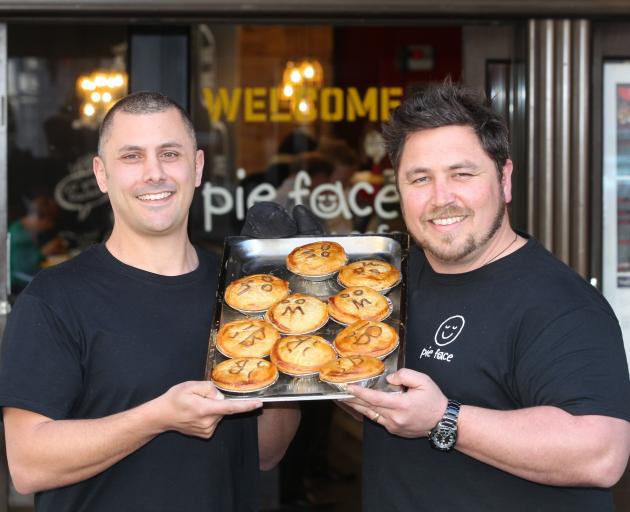 Former franchisees Jared Palmer (left) and Julian Field had plans for dozens of Pie Face stories across the country. PHOTO: THE NEW ZEALAND HERALD
Selling pies to Kiwis — what could go wrong?

Quite a lot, it turns out.

The duo hoped to expand their empire across 60 stores over the following decade.

But seven years later, the men sat in the Dunedin District Court for tax evasion of $140,000, following a nightmarish battle to keep the business afloat.

The court heard Field’s marriage had been destroyed and his health had taken a hit after he sank more than $1.1million into the failed venture over its relatively short existence.

But there was a skerrick of good news: after two years before the court both men were discharged without conviction at a recent sentencing.

A criminal record would likely be "catastrophic" for many of Field’s other companies, Judge Kevin Phillips said, and Palmer’s reputation would be in tatters.

The PAYE debt which had been accrued had since been paid off and the men had no previous convictions, the judge noted.

The Pie Face website charts the company’s growth from a single outlet in Sydney to the launch of the franchise programme in 2008.

The shops were known for the faces atop their pies and coffee ranging in strength from "still asleep" to "kick my arse".

The restaurants spread to other major Australian cities over time before the foray into the New Zealand market.

In November 2014, however, the firm entered voluntary administration, which resulted in franchise closures and the loss of hundreds of jobs.

As things soured overseas, problems mounted for Field and Palmer.

Judge Phillips said the pair had been forced to set up another company in mid-2015 to provide baked goods to the chain of stores when supply lines were compromised.

It was "like a snowball going down a hill", the judge said.

The debts grew and the business partners neglected to pay PAYE deductions to the Inland Revenue Department (IRD).

The money was used as a buffer against significant cash-flow problems they were experiencing, the court heard.

While the amount owed ballooned between 2014 and 2016, Field remained in contact with the IRD, hoping to find a solution.

It was certainly not the case that the unpaid funds were pocketed by the directors or used to fund a lavish lifestyle as was the case in many prosecutions, Judge Phillips said.

In May 2016, there were two Pie Face stores in Auckland, and one each in Balclutha, Christchurch and Gore.

Field told a website there was a lot of interest from potential franchisees in the North Island and he hoped to have 12 more outlets open by 2018.

Behind the scenes, though, things were disintegrating.

After desperately searching for a buyer for the business, the company voluntarily stopped trading in July 2016.

By the end of the year, both companies associated with the venture were liquidated.

Charges were not filed against Field and Palmer until March 2018, despite their transparency with the IRD.

He accepted the repayment of the funds was a significant mitigating factor and there had been no attempt by the defendants to deceive the department, but said the non-payment gave the company a competitive advantage over others operating legally during the period.

Field’s counsel Geoffrey Clews, however, told the court the crimes were "certainly not egregious".

His client, he said, had no previous convictions and had a string of successful businesses to his name.

Field owned several Subway restaurants in Dunedin and Gore, employing at least 70 people, and Mr Clews told the court if a conviction was entered the impact could be huge.

The contract with Subway, he said, "allows the franchisor the ability to effectively strip a franchisee of their franchise [and] terminate their investment without compensation".

One of Field’s business partners had suffered such stress through the criminal proceedings that they had walked away from the business, the court heard.

The Wanaka-based defendant had also found it a "searing experience" and would never let such circumstances develop again, Mr Clews said.

"[It is] essentially a one-off blemish in what is otherwise an outstanding business history and career."

Palmer did not have the business experience of his co-defendant and was focused on the operational side of matters, his counsel, Lisa Preston, said.

The finances were left in Field’s hands.

While it gave Palmer no legal defence, Judge Phillips accepted his naivety.

Although a conviction would not have the same wide-reaching consequences as it would for Field, Mr Preston said it could effectively blacklist him in the tight-knit business community of the lower South Island.

The judge said it would be fundamentally wrong to convict one of the men and not the other.

"Neither man has walked away from responsibility, both have expressed remorse," he said.

"I consider it’s highly unlikely either man will reoffend ..."

Field provided a written statement to the Otago Daily Times in which he acknowledged the fiasco as "a very stressful time".

"I would prefer to leave any experiences had with Pie Face in the past as is appropriate," he wrote.

"I am certainly enjoying being able to move on and to finally put this chapter behind me."

Palmer did not respond to phone calls.

In April 2017, Pie Face was sold to United Petroleum, for an undisclosed sum.