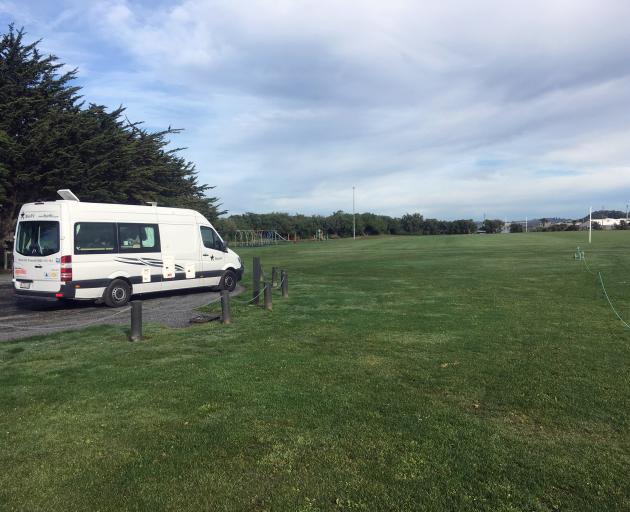 A camper van is parked in an area of the Brighton Domain on Satur­day, which could be closed to freedom camping if a proposal is accepted. Photo: Shawn McAvinue

Mrs Budge spoke about her concerns about freedom camping in her suburb during the public forum of a Saddle Hill Community Board meeting last week.

She had lived in the suburb for eight years and used Brighton Beach and Brighton Domain most days, she said.

‘‘It wasn’t very pleasant to clean up,’’ she told board members at the meeting, held at the Municipal Chambers.

She had seen freedom campers urinating at the domain and others washing their dishes in rock pools.

‘‘The environment is one of our greatest assets . . .and once it’s ruined it’s hard to go back to what you had.’’

Michelle Budge raised concerns about freedom camping in Brighton in the public forum of a Saddle Hill Community Board meeting at the Municipal Chambers last week. Photo: Shawn McAvinue

She believed the domain should have greater restrictions for freedom camping so space was available for Dunedin residents, she said.

She asked the board to act on her concerns.

Board chairman Scott Weatherall said others in the community shared her concerns, and he had arranged a meeting with board members and Dunedin City Council staff, including parks and recreation group manager Robert West, at the domain in February.

As a result of the meeting, a proposal for community consultation was being created, he said.

If the proposal was accepted, freedom campers would be restricted to a gravel area in the domain shaded by large pine trees, he said.

Mr Weatherall said Mrs Budge had made a ‘‘positive contribution, rather than just having a rant’’.

‘‘We appreciate your approach.’’

Mr Weatherall asked Mr West, who was at the board meeting, to tell the Department of Conservation about campers washing dishes in rock pools.

Mr West agreed to do so and also thanked Mrs Budge for her input.

The council reviewed freedom camping regularly and would assess the 2017-18 season in the coming months, Mr West said.

What's needed here is a prime-time TV speech by the PM to the nation on how these people conduct themselves, and how their latrine habits are a disgrace to themselves and their country.

Here's an idea,build some, , toilets .