Cycling advocate group Spokes says confusion about the new road layout at the site of a fatal cycling crash in Anzac Avenue can be seen in the video above with most drivers not stopping at the new "stop" sign.

The death of a cyclist and "frightening" behaviour from motorists means changes are afoot for the Anzac Ave and Dunedin Railway Station area.

A new footpath will be built along the front of the Dunedin Railway Station and the New Zealand Transport Agency (NZTA) is still considering closing the Anzac Ave intersection with Castle Street.

The NZTA has been studying the intersection since the death of Dunedin cyclist Peter James Wells (55), who was hit by an empty logging truck there last November. 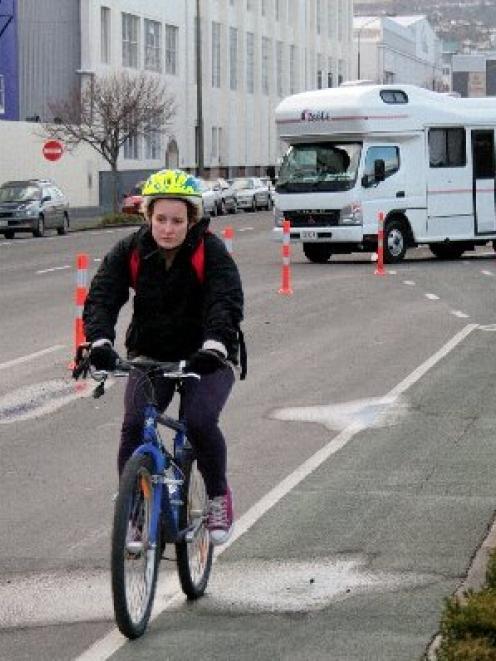 Lonely road: A cyclist navigates her way through the temporary cones being used to control traffic and cyclists at the intersection of Anzac Ave and Castle St. Photo by Dan Hutchinson
Dunedin cycling lobby group Spokes has also taken an interest in the intersection and on Friday last week, spokesman Hank Weiss was out filming the behaviour of road users.

His footage showed most cars were not stopping at the new "stop" sign and a truck approaching the intersection at the same time as a cyclist "eerily similar to last year's fatal crash".

Temporary road cones, some of which had been knocked over last Friday, and the sign were put there by NZTA to make drivers look where they are going and keep an eye out for cyclists.

"If you go to the blog www.spokesdunedin.wordpress.com you will see this truck-cyclist interaction that is pretty frightening, because the traffic doesn't know exactly where to stop," Mr Weiss said.

NZTA Otago-Southland State Highways operations manager Roger Bailey said the temporary layout had been "helpful to some extent", but there were still too many drivers not stopping completely.

"This is compromising cyclists' safety and sometimes causing them to have to swerve sideways into the live traffic lane, to avoid collisions."

He said options for the intersection ranged from turning the end of Anzac Ave into a T-intersection to making it a cul-de-sac, with no exit on to Castle St.

All of the options included a new section of footpath for pedestrians along the front of the railway station garden.

"While there are specific concerns around cyclist safety, we have also identified the need for better footpath facilities around this area," Mr Bailey said.

He said it was "unlikely" there would be any changes needed to the garden, but it could not be ruled out.

The NZTA and the Dunedin City Council were working through the various options and would be ready to consult other interested people and nearby property owners by September.

The actual work should be finished early in 2013, Mr Bailey said.