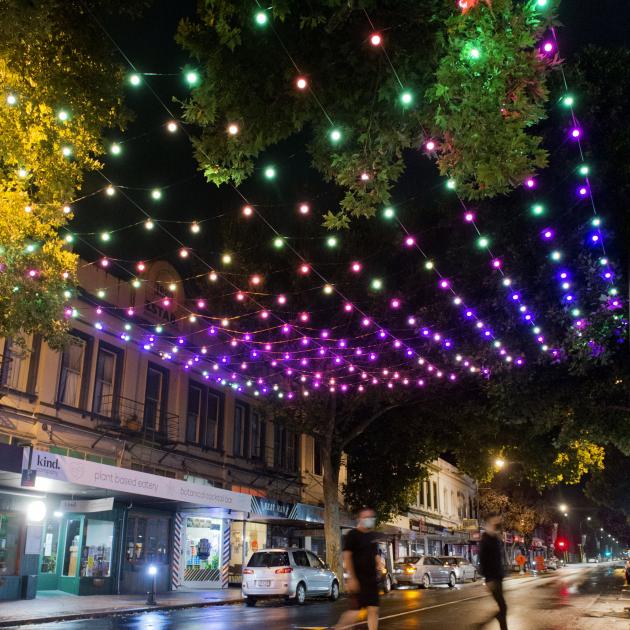 Rainbow lights glow, festooned in the dark over a section of George St early yesterday as part of Dunedin Pride month. PHOTO: GERARD O’BRIEN
Who might you meet under a rainbow-tinted sky?

From wild women and dungeon dwelling drag queens to five lesbians eating a quiche, all manner of queer folk are getting ready to celebrate Dunedin Pride month.

A full month of events is planned, anchored by the Rainbow Aurora lighting rig that was installed on Tuesday night above a section of George St between Hanover and London Sts.

Dunedin Pride secretary Trak Gray said the artwork, which was a collaboration with the Dunedin Dream Brokerage’s platform project, was the starting point of planning a Pride festival resilient to Covid-19 protocols.

"It gave us the opportunity to do something that we felt confident could go on even if everything was locked down, no matter what happened with Covid there would be something up for Pride."

One event expected to have poignancy was a queer-friendly evening church service at St Paul’s Cathedral on March 27.

"A church space and a safe space haven’t always been the same for our community, so its pretty cool that St Paul’s Cathedral are welcoming us in."

The service had been facilitated in part by the Student Christian Movement.

The first event on the festival schedule was the Pride Walk 2022 which was taking place on the Pineapple Track at 10am this Saturday.

The walk, which was being hosted by Wild Woman Walks, was to be followed by a picnic in Woodhaugh Gardens.

Other highlights of the festival include the FriGAY mixer at Lan Yuan Chinese Garden on March 25, and a Dungeons and Drag Queens event at Megazone on March 14.

Two tables would be running games of Dungeons and Dragons with Drag Queens taking the role of dungeon master.

While space would be limited in the games, there was plenty of other activities planned in the space for the day.

There was a variety of comedy shows and film screenings on the schedule, and plays to be performed include Gaslight Me and 5 Lesbians Eating a Quiche.

The month of events was to be capped off with a quiz night in Woof Bar on March 29.