Gallery full as Cull sworn in 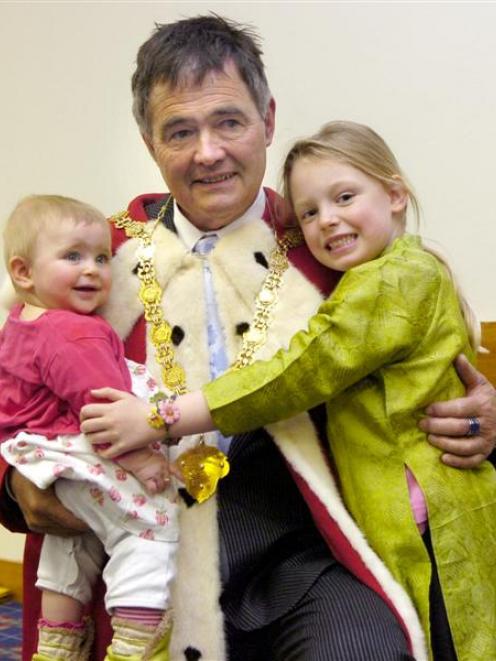 Dunedin Mayor Dave Cull is congratulated by granddaughters Carli (left) and Kaia Hutchison moments after being sworn in at yesterday's Dunedin City Council meeting. Photo by Jane Dawber.
Dunedin Mayor Dave Cull donned the robes and chain of office for the first time yesterday, pledged to do his best and received an enthusiastic hug from two future ratepayers.

It was not a bad start to his first official day in office, even if the future ratepayers in question were his granddaughters, Kaia Hutchison (5) and her 6-month-old sister Carli.

The young pair were among a packed public gallery of friends and family watching as Mr Cull and the city's 14 councillors were sworn in at yesterday's inaugural Dunedin City Council meeting for the new term.

Among the intake were two new faces, Crs Richard Thomson and Jinty MacTavish, and one returning one, Cr Lee Vandervis.

Welcoming them, Mr Cull said he also wanted to acknowledge the community that voted for and shaped the new council.

"I have to admit this position is not where I thought I would be three years ago ... when I first embarked upon council."

However, he was "very aware" of the responsibilities that came with the job, as well as the community's expectations.

"I will do my best to live up to those expectations."

He also vowed to tackle those challenges, while ensuring the council stayed in touch with its community.

"We all know what a tightrope that could be. It's not an easy job," he said.

The council also acknowledged the efforts of retiring community board members Pam Mason, from the Mosgiel Taieri board, and Nancy Higgins and Murray Holland, from the Waikouaiti Coast board.