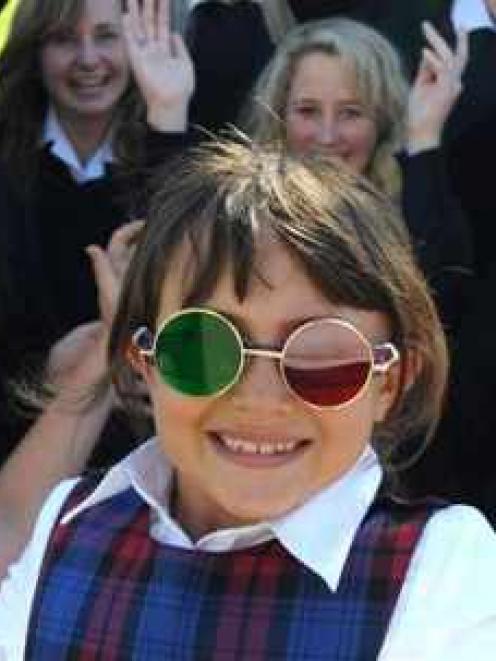 St Joseph's Cathedral School pupil Natalya Skelton takes an active part in research into the treatment of amblyopia, and is helped with her programme by Kavanagh College pupils. Photo by Peter McIntosh
Natalya Skelton has a simple goal - to pass a driver's licence vision test.

The 9-year-old Dunedin girl went blind in one eye six years ago after suffering a complication from a virus.

Three years later, her sight was restored by a delicate corneal transplant operation, a New Zealand first for someone her age.

Now she is concentrating on therapy to help co-ordinate both eyes to work together.

Natalya's mother, Kirsten Anderson, said she was one of the first children to be involved in a pilot project, based at Canada's McGill University, to improve binocular vision in people with amblyopia - a condition where normal binocular vision fails to develop.

"Natalya is a guinea pig to see if it will cure people's eye problems.

"She is pioneering this [and] it's opening up really interesting opportunities for people," Ms Anderson said.

Since February, Natalya had been playing a tetris game on an iPod touch for at least an hour each day, while wearing glasses with one red lens and one green.

While she had sight, she was missing the 3-D component of true vision and the game was trying to restore that.

The glasses "create an artificial 3-D environment" and, as her eyes tracked each piece in the game, neural pathways were stimulated to help her "click into binocular vision".

Supporting her with the programme were 29 year-13 Kavanagh College pupils.

The girls took turns visiting Natalya at St Joseph's Cathedral School, to help with the therapy and support her through it.

"They have been fantastic."

Natalya will be part of the programme for up to two years.

She and her mother commute to Auckland once a month for re-testing and game adjustments.

University of Auckland post-doctoral research fellow Dr Joanna Black, who worked with Natalya for the research, said the initial techniques were developed in Canada and brought to New Zealand by her colleague, Dr Ben Thompson.

Dr Black said most therapy for amblyopia involved patching the good eye to strengthen the lazy one.

She expected it to take about six to eight weeks for improvements to be seen in Natalya's vision.