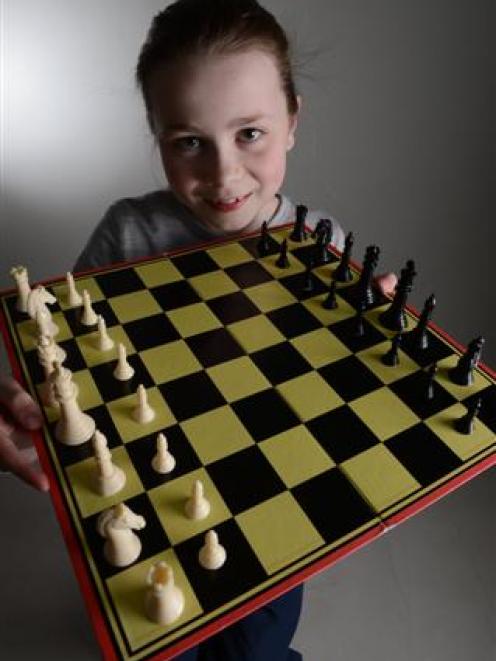 Devon Gamble floored her opponents and her parents when she won two gold medals in Chess Power's interschool chess championship in Dunedin on Tuesday. Photo by Stephen Jaquiery.
When it comes to chess, 10-year-old Devon Gamble, of Dunedin, is proving to be king.

Devon was taught the game six months ago and surprised everyone, including herself, when she won two gold medals at Chess Power's interschool championship in Dunedin this week.

The St Brigid's School pupil said her 13-year-old brother taught her to play at Christmas and, although she enjoyed the game, did not take it too seriously.

She was also awarded distinction for being in the best 5% of chess players in New Zealand and won awards for setting up a chess board in the fastest time and the best score in the puzzle challenge.

Her win qualified her for a national tournament in Auckland in September.

Her mother Tracey Gamble said Devon was a talented school pupil, but her ability in chess was a revelation.

"I was a bit surprised when her brother came running out and said 'Devon won two gold medals'," Mrs Gamble said.

"The chairman told her she was the only girl who has ever won [the tournament]."

Devon was modest about her win and said although it was good, it did not compare with going to Taylor Swift's concert in Auckland earlier this year.