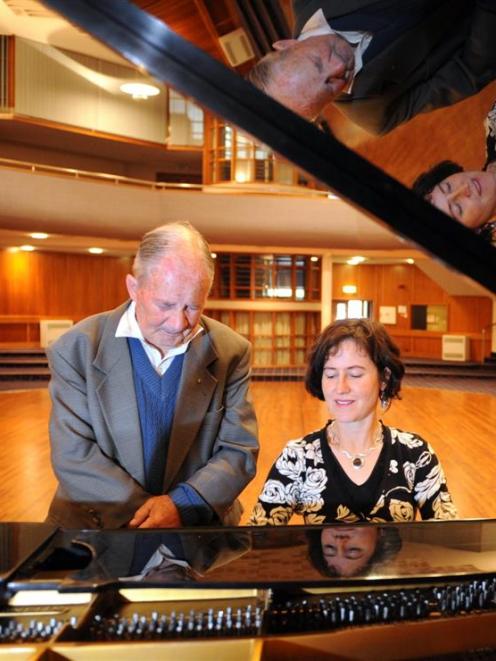 She made a few phone calls to Dunedin Centre management to ask if it was possible to open the centre on Boxing Day.

Manager Svend Tolson agreed to interrupt his holiday to open the centre for the family.

It was a thrill to re-create the "magic" days of her childhood when her father, Les McGilvary (86), who worked at the Dunedin Town Hall for many years, would bring Mrs Howard and her sister into work to play the piano during the school holidays.

"It was always tucked away behind the stage or in a cubby hole, all dusty. It was quite magic; a real treat for us."

The session was also a tribute to her father's sacrifices, which allowed her to receive years of expensive piano lessons, Mrs Howard, of Kaikoura, said.

"He loves his music, but never had the opportunities, so having this opportunity is a way of honouring him for the sacrifices Mum and Dad made."

Yesterday, she played some of her father's favourites including Chopin's Nocturne No 13 in C minor and music by Billy Mayerl.

"This is the icing on the cake, playing such a beautiful instrument."

While Mr McGilvary did not play the piano, he loved music and often used to spend his lunchtimes listening to visiting musicians rehearsing.

"It was the best piano in the country then. It's a marvellous piano," he said.

Mrs Howard said she had inherited his love of music and she still rose early to play piano as she did when practising all those years ago.

"It's just become a love for me. It affects all parts of my life."

She also played the odd concert, did shows and sang in a "girly group".