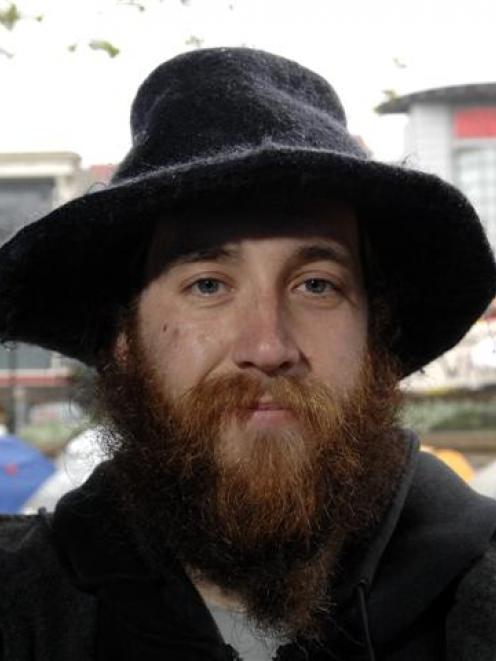 Bert Holmes
Major bank branches on Dunedin's main street are being targeted by protesters aligning themselves with the Occupy Dunedin movement.

Dunedin Mayor Dave Cull yesterday confirmed he had received a complaint from one George St bank on Thursday, after it and surrounding businesses were targeted with anti-greed graffiti for the third time in two weeks.

The complaint said the posters and ink stamps attached to the businesses' windows contained slogans attacking corporate greed and poverty, and were "clearly attributed" to the Octagon protest or its sympathisers, Mr Cull said.

"It may not be the people in the Octagon but it's certainly their sympathisers," he said.

At the same time, a worrying increase in human waste and urine around the council's own Civic Centre buildings was threatening to become a public health issue, Mr Cull said.

Council building attendants had reported a noticeable increase in both types of human waste since the protest began, although the incidence of faeces had dropped again after a Port-a-loo was installed in nearby Municipal Lane, he said.

Dunedin police also confirmed yesterday they had launched an investigation after one person was recorded by security cameras defecating in the doorway of the National Bank's Octagon branch last week.

A complaint had been received, but no suspect had been identified, Senior Sergeant Brian Benn said.

Occupy Dunedin protester Bert Holmes - speaking as an individual - told the Otago Daily Times it was "slightly disheartening" to hear of the claims of vandalism, but impossible to say who the culprit might be.

He was not aware of any discussion about such tactics among protesters, but it was possible an individual was taking their own steps to "get their point across", he said.

It was also possible someone was trying to discredit the movement, he said.

Protesters spending time in the Octagon were attempting to keep the camp "clean and tidy", including protecting the grass, and were encouraged to use the public toilet or Port-a-loo, he said.

However, they were camping in a public space with regular visitors, and it was possible individuals visiting the site "have their own disregard for rules and regulations", he said.

"There are all sorts of people on the fringe of society who like to come and hang out."

Bank staff and nearby businesses approached by the ODT yesterday either declined to comment or denied any knowledge of the graffiti and vandalism problems.

Mr Cull said there was no way of connecting the human waste problems to the protesters "without a DNA test", but the increase appeared to correlate with the arrival of protesters in the Octagon.

However, the problems with human waste showed why a bylaw prohibiting camping in the Octagon was needed, he believed.

"Apart from anything, there's not the facilities for people to live rough in that area. If it continued for any length of time it becomes a public health issue."

The targeting of businesses was "pretty disappointing", but he would not be taking any action after the bank's complaint.

Police were still considering their legal position yesterday, before deciding whether to enforce trespass notices issued to protesters by the council on Tuesday.

Mr Holmes said the council's offer of a compromise, made by Mr Cull on Thursday, also needed further discussion before a decision was made.

Meanwhile, council community and services recreation manager Mick Reece said the council would continue to supply power and a port-a-loo to protesters, until negotiations were completed.

There was a power supply to the Octagon bandstand, which the council paid for and controlled for legitimate events, such as official protests.

The council had discussed turning off the power supply, but decided to leave it on as it did not think the protesters would move out simply because the power was cut off, so to do so might seem petty, Mr Reece said.

"There is a bigger issue at stake here and we're trying to solve that, rather than do small things to annoy them."

The ODT has also become aware that several people with extended violent criminal backgrounds are hanging around the protest.

Dunedin police would not specifically say they knew of individuals, but said they were aware of "who was round and about in the Octagon" and they continued to patrol the CBD as part of their normal business.