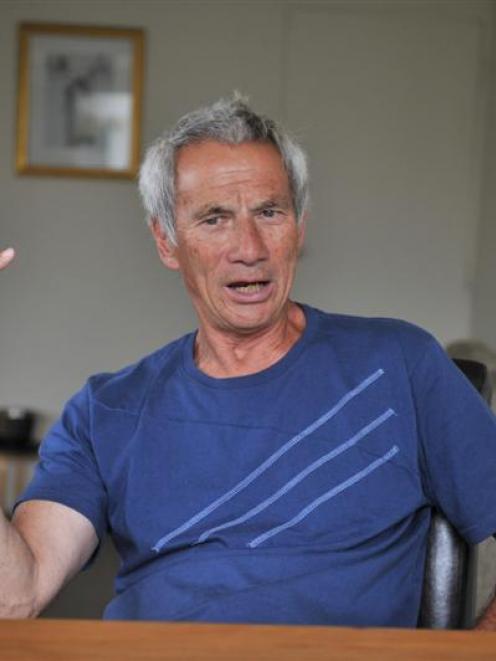 Rex Haig is considering restarting his bid for compensation for the 10 years he spent in prison before his 1995 murder Conviction was quashed by the Court of Appeal. Photo by Linda Robertson.
Rex Haig may again look at seeking compensation after the outcome of David Bain's bid. Mr Haig (67), who now lives in Dunedin, spent 10 years in prison for the murder of Mark Roderique, who went missing while on a fishing trip off Westland on Mr Haig's boat, Antares, in 1994.

He was convicted of Mr Roderique's murder in November 1995.

In 2006, the Court of Appeal quashed his conviction.

However, the following year his compensation claim for wrongful conviction and imprisonment was rejected by Robert Fisher QC.

Mr Haig - in an interview in Dunedin with the Otago Daily Times - said, at times, he had thought of giving up his quest.

''My case has taken years and years.''

His legal team would wait for the outcome of Mr Bain's compensation bid, and failing that, a change of government.

He said he once shared a cell with Mr Bain for several weeks in Dunedin Prison, but had not talked to him since.

The review was sought over former justice minister Judith Collins' handling of his compensation bid after she questioned the quality of a report by a former justice of the Supreme Court of Canada, Ian Binnie.

However, Mr Haig told the ODT: ''I actually think a Labour government are the ones who will deal with it.''

He said his case would never have gone to the Court of Appeal if former prime minister Helen Clark had not become involved.

''[She] helped me and I think that was quite significant, because she didn't need to.

''The National Party have done nothing for me. Jim Bolger, Doug Graham, John Key ... all the rest of them.''

While the judiciary ''tried to help me'', he had no love for the Ministry of Justice, which had made his life difficult, Mr Haig said.

It was ironic several recommendations he made after his incarceration had been used for the ministry's booklet on compensation for wrongful conviction and imprisonment.

Those recommendations included compensating partners for their suffering, while a claim for wrongful conviction should result in a minimum payment of $100,000 for each year spent in prison.

He said for people who spent a long period in prison it ''takes a long time to adjust ... You are mentally and physically fatigued and you can't work a full eight-hour day''.

It took him two years to return to work and he estimated that and his time in prison, coupled with loss of work and investments, had cost him $12 million.

''I used to have a million in the bank when I sold my paua quota and I had lots of property, but when you are taken out of the system for 10 years you couldn't earn money and you couldn't invest money ...

''Who knows what else I could have earned?''

Mr Haig, who is a refrigeration technician by trade, divides his time between Dunedin and working overseas as a diving systems technician.