Half a century of stewardship

Norcombe and Sophie Barker play in an empty well in the Larnach Castle grounds in the 1960s. Photo: supplied.
Almost 50 years after  taking on the mammoth task of restoring the grandeur to Larnach Castle,  owner Margaret Barker says the work continues.

On March 3, Dunedin’s Barker family will celebrate 50 years of blood, sweat and tears  restoring and commercially operating the 147-year-old castle.

When the family moved into the castle in 1967 it was "a bit like camping", Mrs Barker said.

"Nothing worked and the roof leaked.‘‘It was never at any time domestic bliss, but it was exciting." 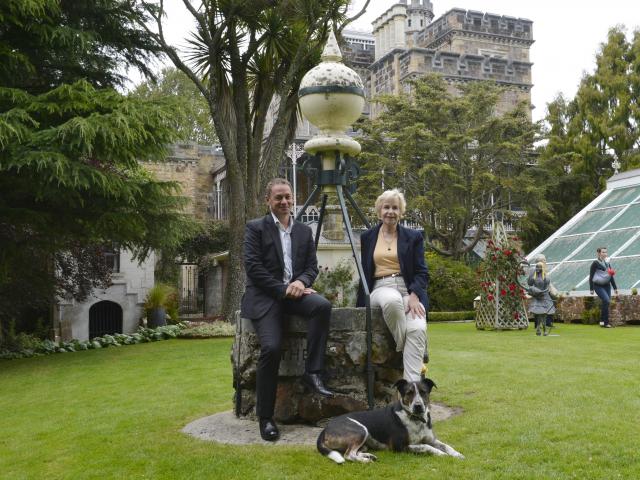 Larnach Castle managing director Norcombe Barker and owner Margaret Barker on the castle grounds earlier this week. Photo: Gerard O'Brien.
Fifty years on, the castle which was a diamond in the rough in the 1960s, had numerous international accolades for both its interior and 35-acre grounds.

Larnach Castle managing director Norcombe Barker said while maintenance of the castle was an ongoing project, the family was keen to celebrate the 50th anniversary of their guardianship.

"This is an enormous milestone for the castle and our family.

"The transformation of the castle has been a lifetime project for the family ..."

As a child he did not ever consider it was unique to grow up in a castle. However, as a teenager it was a great venue for parties, he said.

"When Mum and Dad went away my friends used to come up here for big parties."

As repairs on the castle made it start to gleam again, the Barkers’ relationship with their home and business  changed too.

Mr Barker had attended numerous weddings in his home, while Mrs Barker moved out of the castle about nine years ago, but  retained an apartment there.

The growth of the castle and the family would be on display in a multi-media exhibition at the castle from March 2.

A series of events including a staff reunion, yesteryear gala ball and tree-planting ceremony would be held throughout the year to commemorate the anniversary.