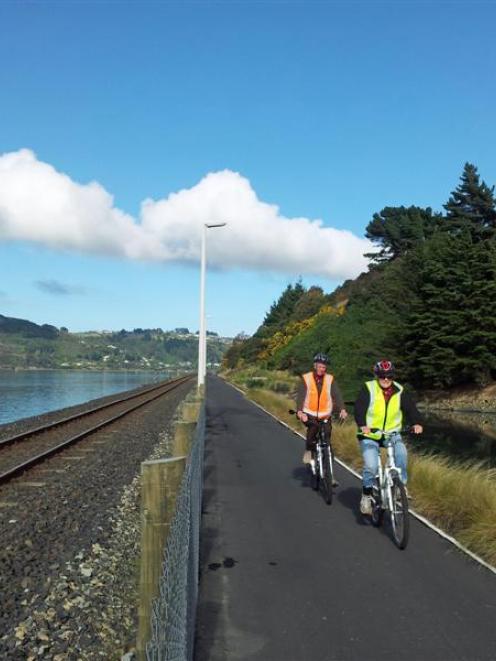 The Otago Harbour cycleway. Photo by John Fridd.
Decisions on the most controversial routes of the South Dunedin Cycle Network will be saved until last.

City councillors have been asked to sign off on the next set of cycleway routes for South Dunedin today, but are to receive a separate report later this month on the last eight routes needed to complete the $4.5 million network.

The exact routes and types of cycleways planned are still in the conceptual stage, but are expected to be contentious because they will have by far the greatest impact on parking and access, particularly in Macandrew Rd.

The network has so far had minimal effect on car parks.

More detailed options for one of the last routes, Victoria Rd, including a shared cycle/footpath option requiring the loss of 38 car parks, have already caused an uproar in St Clair.

Other plans are for new cycle lanes running the length of Forbury, Hillside and Macandrew Rds, with a short separated bicycle facility (SBF) and shared path at the Andersons Bay Rd end of Hillside Rd; a SBF on the south side of Andersons Bay Rd from Hillside Rd to the rail overbridge; a shared path from the overbridge to State Highway 1 and a SBF from SH1 to Gordon St (along the Oval); a SBF connecting Law St with the Caversham shops; and a shared path in Wharf St from Kitchener St to Fryatt St.

More detail of the plans would be provided to councillors later this month, senior transportation planner Lisa Clifford and road project engineer Evan Matheson said in a report councillors will consider today.

They noted councillors last year raised questions about whether cycle lanes, as proposed for Forbury, Hillside and Macandrew Rds, were the most suitable option and whether all cycleways should be separated from traffic.

That would still need to be discussed, but whether the council decided on cycle lanes or SBFs, the result would be a ''significant parking loss'' on Macandrew Rd.

Consultants were looking at both options and their effects and would report to the council on June 23, for a final decision.

In original plans for the South Dunedin Cycle Network, a SBF was approved for Lower Stuart St from one-way Cumberland and Castle Sts to the Octagon, but staff are now proposing that work instead become part of the Central City Cycle Network, which is to follow the completion of the south city network.

• Shared path: Usually a 3m-wide footpath with markings dividing pedestrians from cyclists, often with parking on the outside of the path. Requires widening of existing pathways.

• Separated bicycle facility: Cycle lane between the kerb and parking lane, separated from traffic with a barrier

• Cycle lane: Markings on the road reserved for exclusive use of cyclists, but able to be crossed by motorists

• Quiet street: Low speed, low volume roads where cyclists mix with traffic. May require restricting some entry/exit to divert traffic using the street as a ''rat run'', and traffic-calming to slow traffic.