Primary care nurses, many of whom had never dreamed of going on strike in their lives, walked off the job in GP clinics and medical practices around the region yesterday as part of a nationwide strike.

New Zealand Nurses Organisation nurses, as well as administration staff, stopped work for 24 hours in protest at their pay parity claim with higher-paid DHB nurses not having made any progress.

"Admin staff aren’t even earning the living wage yet, and senior primary healthcare nurses earn 10.6% less than their counterparts in a DHB, and there’s a real issue with recruitment because of this," Dunedin NZNO organiser Karyn Chalk said.

"The Government and the Ministry of Health have agreed to pay parity, but we are still here striking because nothing substantial has happened despite this," Ms Chalk said. 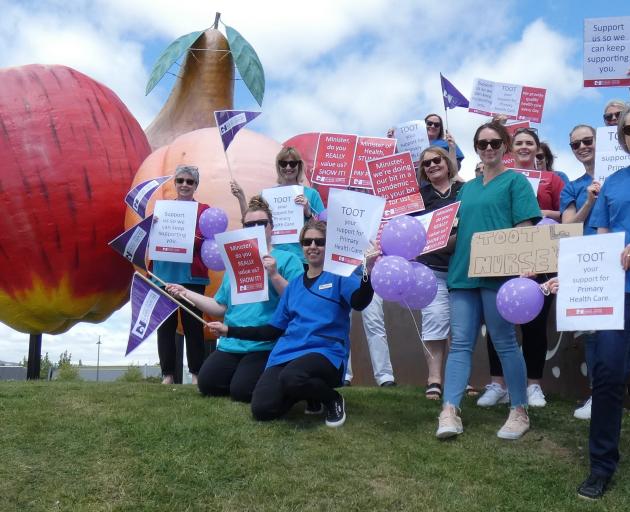 Primary care nurses had been and continued to be on the frontline of the fight against Covid-19, and the lack of progress on their pay parity claim had left them feeling angry, frustrated and undervalued, Ms Chalk said.

"There is talk, but applause doesn’t pay the bills ... The nurses voted overwhelmingly for strike action and that is not something that they have taken lightly," she said.

"They are very dedicated, they are very committed and it is something which is out of the hands of their employers — it is a funding issue between the ministry and the Government."

In Invercargill, about 20 nurses lined Wachner Pl, where drivers showed their support by tooting their horns.

For Invercargill Medical Centre nurse Charlotte Pearce, who was at the strike with dog Pippin, it was all about getting equal pay for equivalent jobs and responsibility.

"It’s all about pay parity. 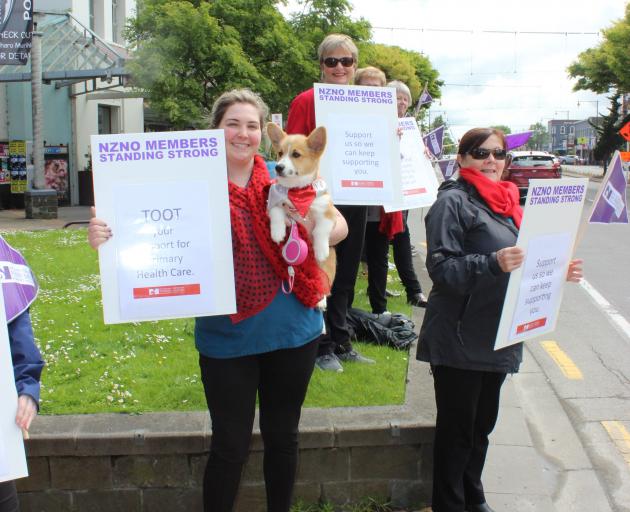 "The fact that a lot of our nurses , that they have had more training (than hospital equivalents) and they don’t get paid for it. It’s just about being equal."

"We are just feeling undervalued at the moment because we are at the forefront of the Covid pandemic."

"I’ve been nursing 45 years and this is the first time I’ve been on strike."

Primary care nurses did the same assessments and triage as hospital staff, and were often doing the work to keep people out of hospital, she said.