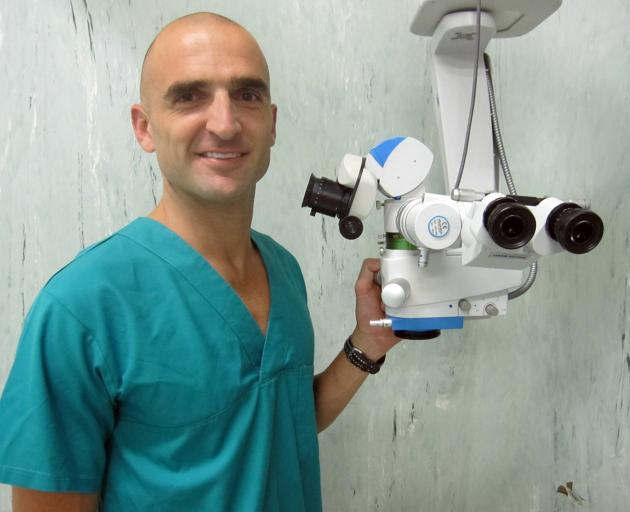 Dr Amir Zarrabi has been made associate professor of urology at the University of Otago and has joined the Southern District Health Board’s urology department. PHOTO: SUPPLIED
The University of Otago has announced it has finally found a specialist urologist to take up the role of associate professor of urology, after hunting for more than a decade.

Despite receiving a $1 million donation to create the position back in 2007, the university was for 12 years unable to fill the research gap due to the worldwide shortage of specialists in the field.

Amir Zarrabi arrived in Dunedin from South Africa last month, with his family, to take up his new position.

Dr Zarrabi is based half at the Dunedin School of Medicine, and half as a clinical consultant for the Southern District Health Board, where he has already started work.

The 2007 donation was made by leading businessman Trevor Scott, who was diagnosed with bladder cancer in 2006 and was now in remission.

Mr Scott said he was "extremely pleased" the position had finally been filled and that he could help fund "this vital area of medical research".

"I had about 20 years helping manage the university’s commercial affairs, including chairing the Commercial Activity Board and working on the University Council, so now it’s great to be able to put something back into the university," Mr Scott said.

Dr Zarrabi, who has a special interest in male infertility and microsurgery, will be joining a team of three urologists at Dunedin Hospital.

In October, a report into urology at the hospital was instigated by health and disability commissioner Anthony Hill after his office received 38 complaints within a short period.

The week after Dr Zarrabi arrived, stories about issues within the service had started being published in the media.

It had been a "trying time" starting work with negative feedback from patients, but thanks to having an extra pair of hands and better "synergy" with four people, the capacity of the urology department had greatly increased already, he said.

It was hard to say why urologists were in such short supply around the world, but Dr Zarrabi said it was a profession which was "not as glamorous as being a plastic surgeon" and where money was not as good as it was in other specialties.

"The real one of the things I think which contributed [to the difficulty finding a urologist to move to Dunedin] is that New Zealand is fairly remote."

The role appealed to him as he recently completed his PhD and wanted the opportunity to balance academic and clinical work, while his family was attracted to the lifestyle opportunities.

"I am determined to make a difference to the clinical services offered in Otago and Southland."

Figures showing the number of people waiting for urology treatment at the DHB were not available yesterday, and the DHB declined to comment on Dr Zarrabi’s appointment.

It is a welcome addition to a department that does still need to sort out its own organisation and be less dependent on others sorting out the inherent character driven problems.