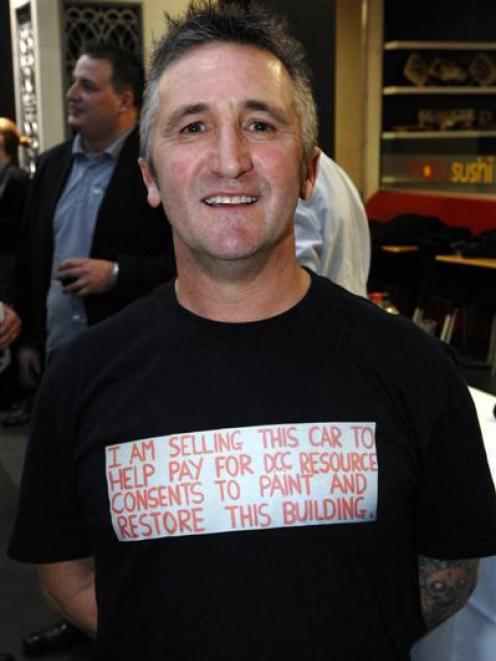 McIndoe building co-owner Lawrie Forbes wears his feelings on his T-shirt. Mr Forbes and his business partner, Craig McNaughton, went through a protracted battle several years ago to have their Crawford St, Dunedin, heritage building rezoned to make it economic for them to redevelop it. Photo by Linda Robertson.
Dunedin property developer Lawrie Forbes could not resist a light-hearted dig at the Dunedin City Council when the Crawford St heritage building he owns with business partner Craig McNaughton won two prizes in the 2012 Dunedin Heritage Reuse Awards this week.

After Dunedin Mayor Dave Cull had presented him with the supreme award for the total transformation of the 119-year-old McIndoe building in Crawford St, Mr Forbes opened his shirt to reveal a T-shirt emblazoned with the words: "I am selling this car to help pay for DCC resource consents to paint and restore this building."

It was a reference to his frustrations in 2010 when he put his 1951 Ford Prefect car up for sale to raise money to pay consent fees to have the building rezoned. It was zoned large-scale retail, which he argued made it uneconomic to redevelop the building for other uses such as smaller shops or offices.

Mr Forbes said his reminder to the council of his feelings was meant in good fun and he hoped it was taken that way.

Receiving the supreme award was ironic, given the red tape he and Mr McNaughton had had to cope with, he said.

But he was pleased there appeared to have been a shift in thinking within the council since 2010 which had made things much easier for heritage building projects like theirs.

Mr Cull did not seem offended by the T-shirt, laughing as he read out the words to about 80 people gathered at Wall Street mall for the awards function.

He said the judges had praised the McIndoe transformation as showing what could be achieved with considerable effort. The owners, designers and builders had "turned a sow's ear into a silk purse", he said.

The McIndoe building is one of three neighbouring buildings formerly occupied by Rogan McIndoe Print. Mr Forbes said the building now housed a freight forwarding company and a physiotherapist's rooms, as well as an apartment in which he and his family lived.

Mr Forbes and Mr McNaughton also have plans to transform the two other buildings into apartments and retail space.

This is the second year the heritage reuse awards have been held. Dunedin City Council heritage adviser Glen Hazelton said he was encouraged to see a huge jump in entries, from 10 last year to more than 30 this year. Entries in the student design competition jumped from four last year to 24 this year.