Heroes back among their communities 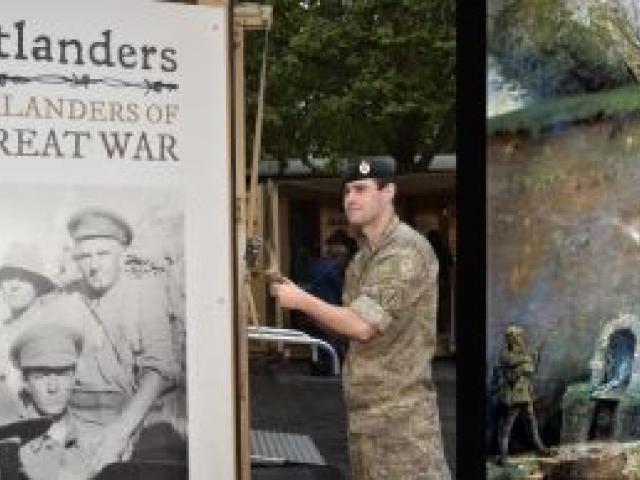 Private Matthew Graham (22), of Bravo 24 Company, adjusts a canopy over an exhibition of army images and memorabilia while drizzle falls in the Octagon, Dunedin, yesterday. Photo by Gregor Richardson.
An exhibition designed to link World War 1 stories and heroes with local communities attracted more than 1600 people in Dunedin during the past two days.

Heartlanders: New Zealanders of the Great War was in the Octagon, as part of its South Island tour yesterday and Wednesday.

National Army Museum assistant curator for vehicles, technology and artillery Grant Hays said the exhibition aimed to give heroes back to their communities.

"We're taking stuff back to the heartland - stories, artefacts and general bits and pieces that might interest people,'' Mr Hays said.

"And it's a chance for us to meet the family members of some of these significant people.''

Three Otago people are profiled in the display: soldiers Alexander William Porteous and Murdoch Campbell, who lied about his age in order to serve, and nurse Catherine Anne Fox.

All three died in the war.

The exhibits were in three shipping containers.

They were divided in to Gallipoli, Sinai and Palestine; Belgium and France; and casualties and the development of medical training.

Mr Hays said the exhibit also offered a chance for families to give memorabilia to the museum, ensuring it was kept safe.

"Particularly elderly people. If they have stuff that belongs to their families, they can donate it to somebody and preserve it.''

The exhibition will move to Invercargill tomorrow.